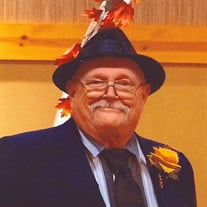 James “Jim” Engwall Ness, age 71, of Menomonie, died Saturday, November 8, 2014 at Mayo Clinic Health System in Menomonie. James was born on November 17, 1942 to Leonard and Clarice (Hunt) Ness in Eau Claire, WI. After graduating from Bloomer High School in 1961, Jim went on to serve his country and joined the U.S. Air force. He served 2 tours as a medic during the Vietnam War and served 3 years in Germany. In 1981 he retired as a Master Sergeant. In 1994 Jim returned to Wisconsin where he spent a majority of his retirement taking care of his brother. He was an avid Atlanta Braves fan as well as a Green Bay Packers and Wisconsin Badgers fan. Jim was a man of the outdoors. He liked fishing and loved hunting with his friend Dave. During the summer months he enjoyed spending time with family and friends at Duncan Creek Campground in Tilden. Jim never had any children of his own, but considered his nieces and nephews like they were his, because they meant the world to him. With his true passion for the outdoors, Jim was a very proud member of the Downsville Sportsman’s Club. Jim established many friendships outside of his family, with his bingo and trivia nights at the Stout Ale House. Jim is survived by his brothers Robert (Ila) Burnell, Leonard Ness, Gerald (Pat) Burnell, Barry Ness, Larry Burnell and Roger Burnell; sisters Phyllis (Fred) Lauderdale-Hitz and Patricia (Roy) Kistner. He is further survived by many nieces, nephews, other relatives and friends. He was preceded in death by his parents, step-father John Burnell, sisters-in-law Marla Ness and Margie Burnell, brother-in-law Ray Lauderdale, niece Lorrinda Ness and a great nephew Justin Ness Funeral services will be held at 11:00 a.m. Friday, November 14, 2014 at Olson Funeral Home in Menomonie with Pastor Shawn Kauffeld officiating. Burial will take place at Northern Wisconsin Veterans Memorial Cemetery in Spooner. Visitation will be from 4:00 to 7:00 p.m. Thursday at Olson Funeral Home and also one hour prior to the service on Friday.

The family of James E. Ness created this Life Tributes page to make it easy to share your memories.