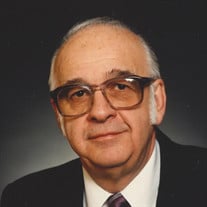 James Frederick (Jim) Mense, age 92, of Menomonie WI passed away Wednesday, August 26th, 2020 at The Neighbors of Dunn County. Jim was born February 15, 1928 in Menomonie Wisconsin to Edwin and Gala (Shultz) Mense. He attended Menomonie area schools, graduating in 1946. He managed several departments for Montgomery Ward’s in Menomonie and Hibbing, MN while in high school and until the Korean Conflict where he served in the Army from 1950 to 1952. Following the service, he managed shoe stores in St. Paul, MN, Eau Claire and Menomonie. Jim married Anna Mae Barstad of Colfax in 1954. He started with Menomonie Farmers Credit Union in March,1968 as a loan officer and Director of Public Relations. He was named a corporate officer in 1981. Jim was very active in state and local conservation efforts. He wrote a weekly outdoor column that had appeared in The Dunn County News for over 46 years. Jim served as secretary of the Dunn County Fish and Game Association for over 46 years. He also wrote for the Badger Sportsman. Jim was a delegate to the Wisconsin Conservation Congress for 47 years and was a Wisconsin Wildlife Federation director for over 25 years. In 1974 Jim received the Gordon Mcquarrie Award for outstanding work in writing about the outdoors and telling the conservation story. In 1998 he received the Wisconsin Wildlife Federation Communicator of the Year Award. Jim was a lifelong member of Peace Lutheran Church, Menomonie. He was a member of the Menomonie Lions Club and had served on the board of directors of the Greater Menomonie Area Chamber of Commerce. Jim loved spending time in the outdoors hunting, fishing and camping with family and friends. Jim was a loving husband, father and grandfather and will be greatly missed. Jim is survived by his son Michael (Cindy) Mense, daughter Debra Mense (canine companion Huey Rockstar), and granddaughters Amanda (Kory) Pechacek and Serena Mense (Ryan Olson), his sister Helenmae Debee, and sisters-in-law, Geraldine Mense and Carol Benish. He is further survived by many nieces and nephews. He was preceded in death by his wife Anna, his parents, brother Donald Mense, brothers-in-law Chuck Debee, John Benish and Chuck Barstad, sister-in-law Donna Barstad, nephews Timothy and Tommy Debee, Jeff and Timothy Barstad, and father and mother in-law, Alvin and Agnes Barstad. There will be a private family funeral service for Jim at 1:30 p.m. on Saturday, Aug. 29, 2020 at Peace Lutheran Church in Menomonie with Pastor Bob Friese officiating. The service will be live streamed to Olson Funeral Home Facebook page. A public graveside service will be at 2:15 p.m. in Peace Lutheran Cemetery in Menomonie with military honors by Menomonie Veterans Honor Guard. Olson Funeral Home in Menomonie is serving the family. A special thank you to the staff at The Neighbors of Dunn County for their care and compassion.

The family of James F. Mense created this Life Tributes page to make it easy to share your memories.