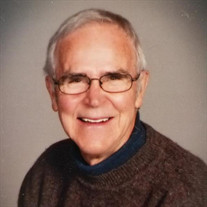 James Richard Daines, 86, of Menomonie WI passed away at Our House Senior Living on Friday, December 31, 2021. He was deeply loved, and will be long remembered and forever missed by his family and friends. Jim was born June 21, 1935 in Stanley... View Obituary & Service Information

The family of James R. Daines created this Life Tributes page to make it easy to share your memories.

James Richard Daines, 86, of Menomonie WI passed away at Our...