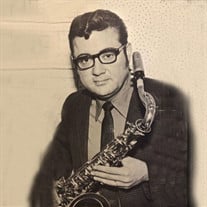 James C. Borgaro, of Menomonie, WI passed away peacefully on July 31, 2019 at Mayo Clinic Health System – Red Cedar. Born in 1935 in a small mining town of Wisconsin’s northern snow belt, Jim was the son of James and Antonette Borgaro of Iron Belt Wisconsin. As a young child he spoke fluent Italian almost exclusively as a third generation of Italian immigrants. He demonstrated perfect pitch early on and after receiving his first saxophone as a gift from his father, he embarked upon a mission focus and developed himself into a well- recognized talent, receiving many accolades and awards. Jim developed a significant following of fans and was even hired as a young teenager to play in clubs and events in Hurley and the surrounding area, which was a booming region of the time, as the mines and logging of the 1940’s presented a larger surge in the Wisconsin economy. Going on to earn full scholarships in music, Jim would attend the University of Wisconsin Madison, where the boy from a small mining town would earn first chair in the UW Madison band. Later, he would do some teaching in Superior Wisconsin where he would meet Jean Heydon and marry her in 1959. After he earned a bachelor’s degree, Jim and Jean would go on to have three children, Keith (Keith and Rose, San Francisco CA), Kim (Los Angeles CA) and Doug (Doug and Heidi, Eau Claire, Wisconsin) Jim taught High School instrumental music in Abbotsford Wisconsin before becoming the instrumental music teacher in Chetek. Jim earned a master’s degree in music from Vandercook College in Chicago Illinois in 1970. In 1975, Jim accepted a teaching job for the Sr. High School music director in Menomonie Wisconsin. He retired from Menomonie after 32 years of service and moved on to do some teaching in music at Glenwood City Wisconsin. Jim was always passionate about music and inspired many of his students. He achieved great success as his bands and musicians would regularly earn top honors and awards in state competitions. Jim was blessed over the years with many very talented students. A good number of them moved on to become teachers, musical composers, and successful professional musicians. Jim along with his family was always proud of his students and their many great accomplishments. As many of his students would affectionately refer to him as Mr. “B”, he was fortunate to make a positive impression on many lives. He had a special ability to challenge and inspire. He was the perfect facilitator to bring out the best in his students and develop their abilities to reach their best. Jim was active for many years in playing “gigs” with his band Take Five. They played in many venues and recorded albums, often packing in fans at places like Lehmans in Rice Lake Wisconsin. Many would travel from significant distances to listen to them, such as from Minneapolis and even Chicago. Jim was a quiet and unassuming soul, particularly in his personal life. Over the years, those who were unfamiliar with his talents would often be very surprised to say the least, as this quiet unassuming man would take the stage and completely blow the doors off the joint. Jim was preceded in death by his wife Jean and is survived by his sister Janet Pozega of Ironwood MI. He is survived by his three children, Keith, Kim and Douglas; his grandchildren, Kaisha Borgaro, Michael Vettel, Maria Borgaro and Michael Borgaro; as well as numerous nieces and nephews. Jim and his wife Jean built a wonderful life together with many great times for his family. We the family learned many lessons from Jim including the depth of his heart. Though his passing represents the end of an era for his family, we are inspired by the promise of the future he made possible. We loved him deeply and his legacy lives on to uplift us. It was our great privilege and honor to share in his life and learn from him and we are comforted to always have the great pride of his memory in our hearts. Jim Borgaro was 84. Funeral services will be held at 2:00 p.m. Wednesday, Aug. 7, 2019 at Olson Funeral Home in Menomonie, with Father John Mano officiating. There will be visitation at the funeral home one hour prior to the service on Wednesday. To share a memory, please visit obituaries at www.olsonfuneral.com

The family of James C. Borgaro created this Life Tributes page to make it easy to share your memories.

James C. Borgaro, of Menomonie, WI passed away peacefully on...