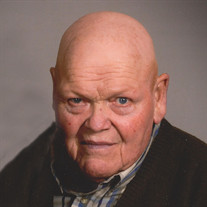 James D. Bilse, age 79, of Menomonie, WI entered eternal life to be with his Savior on Thursday, Nov. 1, 2018 at Mayo Clinic Health System – Eau Claire. James Donald Bilse was born on March 9, 1939 in Menomonie, WI to John and Edna (Dinnies) Bilse. Jim was baptized and confirmed at St. Paul’s Evangelical Lutheran Church in the Town of Prairie Farm. He graduated from Barron High School in 1956 and attended U.W. Stout in Menomonie. He served his country in the U.S. Army. On June 16, 1962 Jim married Mary Ann Dehn at St. Paul’s Evangelical Lutheran Church in New Ulm, MN. Jim worked for his dad at Bilse Garage in Ridgeland, selling Allis Chalmers machinery, Arctic Cat snowmobiles, and Chrysler, Dodge and Plymouth vehicles. He later bought the business in 1968. After selling the business in 1977 he worked for Brave Harvestore selling Harvestore structures and equipment until 2016. During that time, Jim also sold seed for Jacques Seed, which later became Mycogen Seeds, until 2017. Jim loved distributing God’s bounty from his garden to friends and neighbors. He also enjoyed his fishing trips to Canada, mowing his lawn, the many years of golf and camping at Whitetail Golf Course, chicken grilling, big stir fries and hunting trips to Waupaca. He loved sports and was an avid Packer and Badger football and basketball fan. He also enjoyed watching his children and grandchildren playing sports. Jim is survived by his wife Mary Ann Bilse; daughter Katherine Kinney and husband Thomas Jr.; son Michael and friend Lisa Montgomery; and grandchildren Nicholas Kinney, and Carli and Allison Bilse. He was preceded in death by his parents John and Edna and his brother Richard. A Memorial Service will be held at 11:00 a.m. Tuesday, Nov. 6, 2018 at St. Paul’s Evangelical Lutheran Church in Menomonie, with Pastor Aaron Schulz officiating. There will be visitation from 4:00 to 7:00 p.m. Monday at Olson Funeral Home in Menomonie and at the church one hour prior to the service on Tuesday. Burial will be in St. Paul’s Lutheran Cemetery in the Town of Menomonie, Dunn Co. WI.

The family of James D. Bilse created this Life Tributes page to make it easy to share your memories.