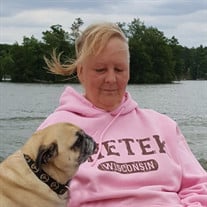 Jacqueline L. Buss, age 61 of Colfax, passed away unexpectedly on Wednesday, October 3, 2018 at her home. Jackie was born on January 19, 1957 in Minneapolis, MN to Robert and Jan (Aakhus) Holzer. She grew up in Menomonie and graduated from Menomonie High School in 1975. Jackie married Randy Buss on September 6, 1975 at First Congregational Church in Menomonie. They were married for 40 years. Randy passed away on October 10, 2015. Jackie was a strong supporter of her children. She encouraged them through whatever interests they had - whether it was sports, 4-H, or all of life’s ups and downs. She enjoyed gardening, crafts, baking, and loved animals. Jackie especially loved her grandchildren. She had a huge heart and was one of the kindest people you would ever have met. Her great sense of humor and the many memories she shared will be remembered forever. Jackie is survived by her daughter, Amy (Clint) Peterson of Colfax, her son, Eric Buss of Tainter Lake, her grandchildren, Chace, Braden and Jaylen Peterson of Colfax; mother Janice Holzer (Arden Alexander) of Menomonie; her sisters JoAnn (Dennis) Gotlibson of Elk Mound and Jill Holzer (Gustavo) of Altoona, WI; brother-in-law Dave (Gloria) Buss of Menomonie. She is also survived by many nieces, nephews, other relatives and great friends. Her loving dog, Spike, was by her side until the end. She was preceded in death by her father Robert Holzer, husband Randy Buss, in-laws Howard and Joan Buss, and her niece Traci Buss. Memorial Services will be held at 1:00 p.m. Tuesday, October 9, 2018 at Olson Funeral Home in Menomonie with Pastor Bob Friese officiating. There will be a visitation one hour prior to the service. Burial will be at Tramway Cemetery at a later date.

Jacqueline L. Buss, age 61 of Colfax, passed away unexpectedly on Wednesday, October 3, 2018 at her home. Jackie was born on January 19, 1957 in Minneapolis, MN to Robert and Jan (Aakhus) Holzer. She grew up in Menomonie and graduated from... View Obituary & Service Information

The family of Jacqueline L. Buss created this Life Tributes page to make it easy to share your memories.