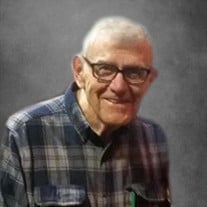 Jack Dwight Vaughan of Colfax, Wisconsin passed away peacefully at his home on Tainter Lake Sunday August 15, 2021, with family at his side. He was 87 and was preceded in death in 2017 by his wife of 65 years Joyce Marie Vaughan (Glossop). Jack was born in Lansing, Michigan on September 3, 1933, to Clarence Dwight Vaughan and Evelyn Vaughan (Dunnigan), who gave birth two years later to his younger sister Kaylynn Mathias (Vaughan). After moving as young children to DePere, Wisconsin, their mother died at a young age and Jack and Kaylynn moved back to Lansing to be raised by their father and stepmother, Georgia Vaughan. Jack played football and basketball in high school and then enlisted in the U.S. Marines Corps. Rising to the rank of Sergeant, Jack saw active duty on the Inchon peninsula during the Korean War. During his service, Jack returned home on leave to Lansing and married his high school sweetheart Joyce on January 17, 1953, at St. Casimir’s Catholic Church. A year later, Joyce gave birth to their first daughter, Connie A. Quilling (Vaughan). Jack returned from the service and enrolled in the Packaging School at Michigan State University. Their young family moved to Glenview, Illinois where Jack started his professional career at Kraft Foods and Joyce raised Connie and their second daughter Michelle M. Rowland (Vaughan). The family moved to Menomonie in 1964 when Jack was hired by Sanna Dairy Co. as a packaging engineer. They built their home on upper Tainter Lake in 1969, where they raised their family, including their third child Brian D. Vaughan. Jack continued to work for several companies in the Twin Cities area for the next two decades including Hoerner Waldorf, Champion Packaging, and American Can. In 1985, Jack launched his own private consulting firm Vaughan Packaging Consulting offering professional packaging assistance to regional and global household goods, consumables, and other manufacturing companies for over two decades. In 2007, Jack accepted an adjunct position at the University of Wisconsin – Stout and taught several courses in the Packaging Department into his early 80’s. He was proud of this achievement having held his education as a first-generation college student as an important steppingstone in his life. He was delighted to share a career’s-worth of knowledge and expertise with his dear colleagues and a new generation of packaging students, many of whom remained in touch with him after graduation. Jack was a tireless worker who rarely sat still around the house. He enjoyed walking, read fervently, and watched movies and the Green Bay Packers and Wisconsin Badgers. He is preceded in death by his parents as well as Joyce, his beloved wife. He is survived by their three children and spouses, six grandchildren (Jack and Katie Quilling; Benjamin and Bradley Bigelow; Beatrice and Julian Vaughan), one great granddaughter (Zoe Quilling), his sister Kaylynn Dean) Mathias, and several nieces and nephews. Memorial Mass will be held at 11:00 a.m. Thursday, August 26, 2021 at St. Joseph Catholic Church in Menomonie with Father Mano officiating. Burial will take place in the church cemetery with military honors by the Menomonie Veterans Honor Guard. Visitation will be one hour prior to the service at the church. Please direct donations in lieu of flowers to Moments Hospice of Eau Claire, for whom the family expresses their sincere gratitude. Please direct donations in lieu of flowers to Moments Hospice of Eau Claire, for whom the family expresses their sincere gratitude.

Jack Dwight Vaughan of Colfax, Wisconsin passed away peacefully at his home on Tainter Lake Sunday August 15, 2021, with family at his side. He was 87 and was preceded in death in 2017 by his wife of 65 years Joyce Marie Vaughan (Glossop). Jack... View Obituary & Service Information

The family of Jack D. Vaughan created this Life Tributes page to make it easy to share your memories.