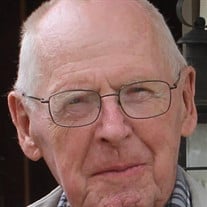 Dr. Jack Sneesby passed away in his sleep on August 15, 2017 at the age of 94 in Denver Colorado. He was born on June 7th, 1923 in Lake Geneva Wisconsin. He grew up in Lake Geneva, New Berlin and Amery Wisconsin as his father’s pastoral ministry took them. As a young man, Jack served in WWII as an Infantryman with the 26th (Yankee) Division and fought through France following the Normandy invasion. He was captured by the German Army and escaped from prison camp when the Russians were approaching and returned to U.S. forces as they were coming through Germany. He was awarded the Bronze Star Medal for his actions. Upon his return from Europe and mustering out, he returned to Wisconsin to study Dentistry and eventually started his practice in Menomonie. He also began his family in Menomonie and raised all his children to love Menomonie as he did. Jack was active in the community and was respected for his contributions. He was awarded the Silver Beaver award for his many contributions to Scouting. Jack loved dentistry work. After 30 years of private practice in Menomonie, he “retired” and went on to teach and supervise dental students at Marquette University for another 25 years until he was 90. At 91 years old he moved to Colorado in 2014 to be near his Colorado children and enjoyed the many moments of talk, games and family events. He was independent, able and active until his years caught up with him at 94 years old. Jack is survived by his sister and brother in law Kay and Don Trull, and his sons Todd, Neil, Charles and John Sneesby as well as his daughters in law and seven grandchildren. He was preceded in death by a son Paul. A Memorial will be held at 11:00 a.m. Friday, September 15, 2017 at Olson Funeral Home in Menomonie with Pastor Doug Stolhand officiating with a light luncheon after the service. His ashes will be interred 1:30 p.m. at Evergreen Cemetery in Menomonie with military honors by the Menomonie Veterans Honor Guard.

Dr. Jack Sneesby passed away in his sleep on August 15, 2017 at the age of 94 in Denver Colorado. He was born on June 7th, 1923 in Lake Geneva Wisconsin. He grew up in Lake Geneva, New Berlin and Amery Wisconsin as his father&#8217;s pastoral... View Obituary & Service Information

The family of Jack T Sneesby created this Life Tributes page to make it easy to share your memories.