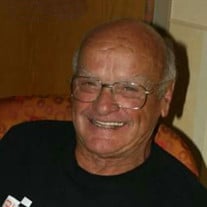 Jack M. Anderson, age 72, of Shell Lake, WI passed away Saturday, September 5, 2015 at Dove Healthcare West in Eau Claire. Jack Marvin Anderson was born on May 9, 1943 in Eau Claire, WI to Edd Gilbertson and Evelyn (Knutson) Anderson. He graduated from Elk Mound High School in 1962 and after high school worked on the Dahl and Carey farm. He then became an owner/operator with Interstate Trucking and later worked for American Materials for many years until his retirement in 2006. After retirement Jack worked for Modern Transport until August 2014. He was a Jack of all trades, who enjoyed working on cars and always helping others when needed. He will be sadly missed. Jack’s greatest enjoyments were his children, grandchildren, racing, playing cribbage and his cat. Jack is survived by his mother, Evelyn Anderson; an uncle, Ernest Knutson; six children, Wayne (Kim) Anderson, Sandra (Dennis) Rhead, Shawn (Sarah) Knutson, Jessica (Ryan) Knutson, Heidi (Jeff) Goettl, and Melissa (Branden) Fankhauser; fifteen grandchildren, Blake (Megan), Lance (Kelsey), Jake, Lauren, DJ, Justis, Kaydence, Bayley, Ali, Collyn, Cameron, Adelaide, Adler, Tayler and Carsen; one great-granddaughter, Kinsey and another great-grandchild due in March. He is also survived by his siblings, Michael Anderson, Clark Topper, Kaye Anderson, Linda Santee and Cheryl Anderson; a good friend Cody Robinson as well as numerous nieces, nephews, other relatives and friends. Funeral services will be held at 2:00 p.m. Thursday, Sept. 10, 2015 at Big Elk Creek Lutheran Church in the Town of Wheaton, Chippewa Co. WI with Pastor Hal Schroetter officiating. There will be visitation at the church from 12:00 noon until the time of the service Thursday. Burial will be in the church cemetery. Always remember he was that guy. He always had our backs, was loved more than any man we have ever known. He did it right and lived his life loving. Directions to church: https://www.here.com/directions/drive/mylocation/Big-Elk-Creek-Lutheran-Church:44.929424,-91.632759?map=44.92942,-91.63276,12,traffic&fb_locale=en_US&x=ep

The family of Jack M. Anderson created this Life Tributes page to make it easy to share your memories.