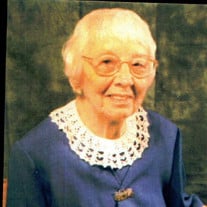 Isabel (Flick) Hintzman, age 97 of Ashland WI formerly Menomonie WI died on Monday, June 13, 2016 at Northern Lights Health Care Center in Washburn WI. She was born Barbara Isabelle (legally changed in later years to Isabel) Flick on August 17, 1918 to Arnold B. and Ermina (Abbott) Flick in an old farmhouse on Dunnville Prairie, Downsville WI. It was her father’s 37th birthday and he too was born in that same house (later known as the Caddy Woodlawn House). In later years the house was moved to a plot of land donated by Isabel now known as the Caddy Woodlawn Park. She attended grade school in the hamlet of Dunnville WI and played in the same woods that Caddy Woodlawn did many years ago. She attended Menomonie High School and loved high school classes to the extent that she cried on graduation day in 1936. Her English teacher urged her to major in Writings in college. But times as they were, she opted to take a short term business course at Minneapolis Business College working for her room and board. Her first job upon graduation was for the WPA Office in Menomonie until the closing of that office, she then went to work for her father’s cousin at Flick Motors as a bookkeeper working six days a week 8a to 6p for $8.00. Once she “learned the ropes” she then earned $10.00 per week until she left that employment in 1941. Isabel met her husband, LaVerne Hintzman, on a blind date on January 29, 1939. They were married May 31, 1941 at Friedens Evangelical (now Peace) Lutheran Church in Menomonie WI. In the 61 years of marriage their travels took them to every state of the Union plus Mexico, Germany (behind the Iron Curtain on the Lutherland Tour), Switzerland, Italy and Bermuda. God blessed Isabel and LaVerne with three children Dixie Lee, Lonnie and Lynn. In May of 1964, with the youngest in eighth grade, Isabel went to work at the First National Bank in Menomonie. She advanced from the bookkeeping department to teller and soon to Personal Banking Officer which came with her own office. Isabel was involved in 4-H work as a 4-H Leader for the Hillcrest Comets 4-H Club; and a Dunn County 4-H Leader earning the honor to represent WI at the Washington DC National 4-H Leadership Council. She also served as the first female President of Peace Lutheran’s Council and President of Dunn County Council of United Church Women. Isabel was an avid gardener and put up many jars of pickles, jams, jellies, fruits and vegetables each year from home grown fair. Isabel would spend many hours peeling apples and freezing up to 50 apple pies each autumn. Isabel published two books: Just Like Peas in a Pod in August 1994 and The Lord My Shepherd Is – Biography of Arnold Flick (her father) in March 1998. Isabel is survived by a daughter, Dixie Lee (Roger) Lesneski, a son, Lynn Hintzman a daughter-in-law Carole Hintzman; a sister-in-law Vivian Welk; eight grandchildren and thirteen great grandchildren, Michael (Diana) Lesneski and sons Nicholas and Gregory; Christine (Lesneski) Siebert and sons Joshua and Jordan; Mathew (Traci) Lesneski and daughter Alena and son Alton; Christopher (Lynn) Lesneski and son Graydon and daughter Macey; Valerie Hintzman (Steven) Wing and sons Alexander and Samuel and daughter Allison; Scott (Jessica) Hintzman and daughters Emmalyn and Tinley; and daughter’s of Lynn Hintzman, Tamara (Scott) Wright and Monica (fiancée-Kyle) Hintzman; numerous nieces and nephews. She was predeceased by her husband, LaVerne (2002) one son, Lonnie (2012) and her parents. Per Isabel’s directives, no formal services will be held. There will be a visitation on Monday June 20, 2016 from 4p to 6p at Olson Funeral Home in Menomonie. There will be a private interment. The family is requesting no flowers but suggests memorials to Alzheimer’s Research, Greater WI Chapter, 3313 S. Packerland Drive, Suite E, DePere WI 54115 (It is tax deductible - ID#13-3039601)

The family of Isabel Hintzman created this Life Tributes page to make it easy to share your memories.