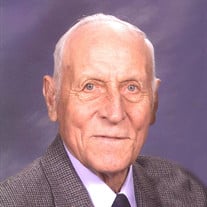 Hugo “Joe” Boerner, age 90, of Menomonie, passed away on Sunday, January 11, 2015 at Mayo Clinic Health Systems in Menomonie. Hugo Henry Boerner was born on December 12, 1924 in the Township of Menomonie, Dunn Co., WI to Hugo and Mary (Werner) Boerner. Joe attended the Irvington grade school and graduated from the Dunn County Agricultural School. He married Donna Eighmy in 1952 at Peace Lutheran Church. Joe was baptized and confirmed at St. Paul’s Lutheran Church in Menomonie. He spent his entire life on the family farm in Irvington until moving to Menomonie after his retirement in 2000. In his younger years he sang and played bass fiddle in a country western band. Joe also sang for many funerals at area churches. Some of his hobbies were musky and trout fishing. He was a quiet man with simple pleasures. Joe is survived by his wife of 63 years Donna, daughter Julie (Mike) Fiege, son Jeff (Laurie) Boerner, grandchildren; Jacob Wolbert, Jenna Schleusner, Justin Boerner, step grandchildren Jeramey and Jonathan Nagy, great grandchildren Carter and Case Schleusner. He was preceded in death by his parents Hugo and Mary Boerner, infant sister Verna, sisters; Martha Cook, Irma Gerth, Norma Cook, brothers; Emil, Milton and Albert. Funeral services will be at 1:00pm Thursday, January 15, 2015 at Peace Lutheran Church in Menomonie, with Pastor Kristine Stedje officiating. Burial will be in the church cemetery in the spring. Visitation will be from 5:00pm to 7:00pm Wednesday at Olson Funeral Home in Menomonie and also one hour prior to services at the church on Thursday.

The family of Hugo "Joe" Boerner created this Life Tributes page to make it easy to share your memories.