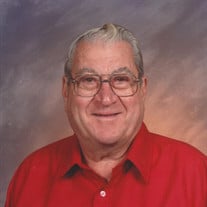 Howard Melvin Smith, age 90, of Menomonie, WI passed away Wednesday night, December 15, 2021, at Mayo Clinic Health System in Eau Claire, WI. His passing followed the “all clear” that came from a rare December tornado and high wind warnings. He took his last breath while holding the hand of his true love of 69 years, immediately after hearing his family safely returned home from sharing their final moments with him. His family will remember that as his final act of love and saying farewell. Howard was born on October 28, 1931, in the township of Lucas “Easyville” on the McCoplin Farm to Floyd and Alice (King) Smith. Howard attended Miller Hill School through seventh grade, then Ideal School for one year, graduating from Menomonie High School in 1949. On September 24, 1948, he met the love of his life, Marjory Beguhn, and were married on April 12, 1952. They had two daughters together, Brenda and Julie. He was drafted in the US Navy in 1955 serving on the AKA 104, the USS Seminole. His service took him to Pearl Harbor, where he saw the USS Arizona, then to Australia crossing the equator becoming a shellback. From there, he traveled to the Philippine Islands, Korea, China, and Japan, seeing where the A-bomb was dropped. He drove truck most of his life. The last 30 plus years were for Phillips 66 and the Dunn County Highway Department where he retired in 1992. He loved to hunt, fish, garden and have a brandy or two. When not on the road, he was often found at the cabin he built in Luck, WI; this is where he shared his love for the outdoors with his sons-in-law and grandchildren. He also enjoyed reading the paper, watching westerns, visiting with family, and calling his daughters daily like clockwork. He was a hard-working husband, father, and grandfather, instilling the importance of family, work ethic and strength into those he loved. A tough exterior and a heart of gold but in the end, he believed you work hard and play harder. Howard is survived by his wife Marjory, daughters Brenda (Gordy) Smith of Menomonie, and Julie Ulberg (Cathy LaCombe) of Menomonie, one brother, Frank Smith, grandchildren Jeremy (Lisa) Smith of Chippewa Falls, Jen (Brad) Helmueller of Menomonie, Mat (Mike) Sokup of Menomonie, step grandchildren Ryan Ulberg, David Ulberg, many great grandchildren and nieces and nephews. He was preceded in death by his parents Floyd and Alice Smith, brothers Neil Smith and Robert Smith, and his sister Linda Sheehan. Visitation will be held at Olson Funeral Home in Menomonie, WI from 12-2pm Monday, December 20, 2021. Burial will take place immediately after, at Christ Lutheran Halvorson Cemetery in Menomonie, with military honors by Menomonie Veterans Honor Guard.

The family of Howard M. Smith created this Life Tributes page to make it easy to share your memories.