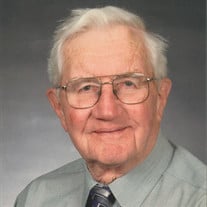 Herb Dow, 90, of Boyceville passed away peacefully at the American Lutheran Home, Menomonie on Friday, December 13, 2019. Herb was born on July 2, 1929, the youngest child of Charles F. and Crystal Dow. Herb grew up on the family farm in Cranetown area south of Downing and graduated from Glenwood City High School in 1947. On June 25, 1954 he married Shirley Formoe at Trinity Lutheran Church, Boyceville. Herb bought his first milk route in 1948 and hauled milk until 1974, he also worked at Peterson's Market for several years. In 1974 he became the public works director for the Village of Boyceville, retiring in 1998. Herb also served in the US Army, 25th Signal Battalion, Company B, 7th Army as a lineman for Operation Gyroscope on the W. German/Czech border. Community and volunteering were important in Herb's life. He volunteered for the Boyceville Fire Department from 1960-1992 and was also Chief for 10 years. Herb also helped found the Boyceville Community Ambulance and was one of the original EMT's, serving the community from 1974-2004. Herb was also a long time Boyceville Village Board member. He also served as Treasurer for Trinity Lutheran Church many times. He was also the go to guy for local history. Herb is survived by his wife of 65 years Shirley. Also survived by 2 sons, Jerry (Gina) of Newark, OH and Wayne (Cindy) of Dubuque, IA; 6 grandchildren, Veronica, Marco, James, Maria, Ruth and Emily; 1 brother, Clarence of Winona, MN; 5 nieces, Lois, Crystal, Deb, Dede, and Darla. Herb was preceded in death by his parents; brothers Robert, Willard, and Charles; sister Helen; sisters-in-law Luella and Mary; nephews Doug and C. Allan. Funeral Services will be held at 11:00 a.m. Tuesday, December 17, 2019 at Trinity Lutheran Church in Boyceville, with Pastor Brad Peterson officiating. Burial will take place at West Akers Lutheran Cemetery, Township of New Haven, Dunn County. Military honors by Harmon-Harris American Legion Post #314. Visitation will be held from 9:00 am until time of services at the church. In lieu of flowers, donations can be made to the Trinity Lutheran Church building fund. The family would like to thank the staff at American Lutheran Home and St. Croix Hospice for their compassion and care. The world’s been good to me. A better place awaits you’ll see.

Herb Dow, 90, of Boyceville passed away peacefully at the American Lutheran Home, Menomonie on Friday, December 13, 2019. Herb was born on July 2, 1929, the youngest child of Charles F. and Crystal Dow. Herb grew up on the family farm in... View Obituary & Service Information

The family of Herb D. Dow created this Life Tributes page to make it easy to share your memories.

Herb Dow, 90, of Boyceville passed away peacefully at the American...