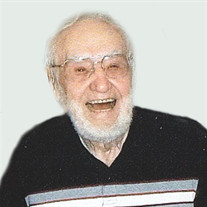 Henry “Hank” P. Hicks, age 95, of Boyceville, WI passed away Thursday, Sept. 28, 2017 at Mayo Clinic Health System in Menomonie. He was born Aug. 19, 1922 in the Town of Lucas, Dunn County, WI to Harvey and Ida (Miller) Hicks. He attended Codington, Hill Side and Maple grade schools, then graduated from Dunn County Agricultural High School and continued to farm at home. Henry married Dorothy Hudson of Eau Claire and one daughter, Vicki JoAnn was born to this marriage. They were later divorced. Henry then entered the U.S. Army and fought in Germany and Austria during W.W. II. When he returned from his military service, Henry worked at U.S. Rubber Built and owned a grocery store west of Eau Claire for eight years. He then became a Real Estate Broker in Eau Claire and in Denver, CO for three years, before returning to WI. Henry married Bernice “Babe” Soeller and moved to California. Babe had three daughters. While in CA, Henry sold real estate and worked in the Sectional Center of the Pasadena Post Office as a Facility Analyst. He retired in 1980 and moved back to WI. He and Babe loved to fish, hunt, bowl and golf and they spent many happy days together enjoying life. Henry is survived by his four daughters, Vicki (Larry) Moskiewicz, Darlene Olocki, Marlene Ulberg and Gerry (Chris) Bowles; many grandchildren, great-grandchildren, great-great-grandchildren, nieces, nephews, cousins and very good friends and niece Candy and Roger Amick. He was preceded in death by his parents, former wife Dorothy, and wife Bernice “Babe”; brothers, Stephen, Boyd, Don, Bob, Richard and Jimmy; sister Lorraine; sisters-in-law; aunts and uncles. A Memorial Service will be held at 11:00 a.m. Tuesday, Oct. 3, 2017 at Olson Funeral Home in Menomonie, with Pastor Rowell Puedivan officiating. There will be visitation at the funeral home one hour prior to the service. Burial will be in St. Joseph’s Catholic Cemetery in Menomonie with military honors by Menomonie Veterans Honor Guard. To share a memory, please visit obituaries at www.olsonfuneral.com

The family of Henry "Hank" Hicks created this Life Tributes page to make it easy to share your memories.