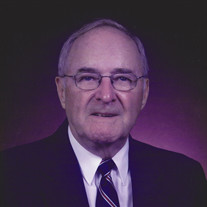 Henry C. Fiege, age 85, of Menomonie, WI died Tuesday, Feb. 20, 2018 at home with hospice. He was born March 27, 1932 in Bayfield, WI to Douglas and Dorothy (Manard) Fiege. He grew up and attended schools in various areas of the state. After graduating from Viroqua High School in 1950 Henry joined the U.S. Navy and served for four years. He was a flight crew member with Patrol Squadron 57 during the Korean War and served in that area. Henry married Neva J. Schroeder on Dec. 26, 1955 at St. Mathews Lutheran Church in Stoddard, WI. He was an active member of St. Paul’s Lutheran Church in Menomonie and served on a number of church boards. In 1956 Henry graduated from the Wisconsin State Patrol Academy. After three years as a trooper he left to work as an investigator with the State Beverage and Cigarette Tax Division for 11 years. He then was assigned to the Wisconsin Department of Justice as a Special Agent with the DCI Arson Bureau until his retirement in 1987. Henry also served on the Menomonie City Council for six years, was President of the Police and Fire Commission for twelve years and a member of the Menomonie VFW Post 1039. Henry was a sports fan and enjoyed the Green Bay Packers. He made many fishing and hunting trips with his sons and friends to Canada, the Dakotas as well as the Wisconsin area. He was a loving husband and a devoted father and grandfather. We will miss him, but we are happy that he is at rest with his Lord. Henry is survived by his wife Neva Fiege; three sons, William (Billie Jo), Michael (Julie), Patrick (Julie) all of Menomonie; seven grandchildren, Seth, Trevor, Jenna, Joshua, Jackie and Nathaniel Fiege and Jacob Wolbert; six great-grandchildren, Zoey, Emmett, Lynley, Carter, Case and Cambreigh; sisters, Mary Jane of FL, Dorothy Ann of MI, Virginia (Ginger) of IL and Christine of Cornucopia, WI; as well as many nieces, nephews, in-laws and friends. He was preceded in death by his parents; his step-mother Signe Fiege; and a sister Patricia Helsing. A Memorial Service will be held at 2:00 p.m. Sunday, Feb. 25, 2018 at St. Paul’s Evangelical Lutheran Church in Menomonie, with Pastor Aaron Schulz officiating. There will be visitation at the church one hour prior to the service on Sunday. Burial will be in St. Paul’s Lutheran Church Cemetery at a later date.

Henry C. Fiege, age 85, of Menomonie, WI died Tuesday, Feb. 20, 2018 at home with hospice. He was born March 27, 1932 in Bayfield, WI to Douglas and Dorothy (Manard) Fiege. He grew up and attended schools in various areas of the state. After... View Obituary & Service Information

The family of Henry C. Fiege created this Life Tributes page to make it easy to share your memories.