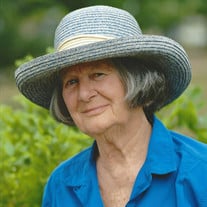 Helen Anne Thurston, 94, passed away on Friday, October 13, 2017, in Menomonie, Wisconsin. Thurston was born on March 1, 1923, in Columbus, Ohio, to Tracy George Cook and Helen Louise Eisele. She graduated from high school in Sylvania, Ohio, in 1941 and enrolled at the Ohio State University that fall. She married Lt. Edward Asher Thurston on July 25, 1943, and the couple moved to Fresno, California. She graduated from Fresno State College in 1945 with a bachelor’s degree in fine arts. While a student at Fresno State, Thurston won a national design competition and her plans for “tomorrow’s dream home” were published in McCall’s magazine. In 1951, her husband’s military orders took the family to Guam. After the war, they moved back to Ohio. With the prize money from the McCall’s contest, the Thurstons purchased a five-and-a-half acre farm where they built their dream home on Holland-Sylvania Road in Toledo. In 1961, the Thurstons and their four children moved north to Boyne City, Michigan. Thurston’s husband and her brother, David “Doc” Cook, ran a ski resort, while Thurston taught art and Michigan history in East Jordan, and fifth-grade in Boyne City. Thurston also served as a cartographer for Top of Michigan Rural Electric Cooperative and Wolverine Electric Supply Cooperative in Boyne City. She later managed the Crooked Art Tree Gallery in Petoskey. In 1991, Ed and Anne Thurston became legal guardians of three of their grandchildren and raised a second family. This led her to be active in the local school system school. She served as a school board representative and painted sets for the high school drama department. Thurston was very involved in the community. She helped to fundraise to keep the public library open. The town celebrated “Anne Thurston Day” in honor of her efforts. She was active in the local book club, writer’s group, and the Boyne Arts Collective. She also served as a columnist and political cartoonist for the Boyne Citizen newspaper. Thurston was a faithful member of the First Presbyterian Church of Boyne City where she served as an Elder and taught Sunday school for many years. She loved her family and friends, camping, skiing, traveling and gardening. After the death of her husband of 65 years, Thurston moved to Menomonie, Wisconsin, where she married Paul Pellett in 2015. The couple enjoyed going on boat tours, traveling to the Grand Canyon, and visiting waterfalls in several states. Thurston’s positive spirit was an inspiration to many. She enjoyed painting pictures because she knew they brought joy to those she loved. She was also an avid reader and writer. Thurston published a number of books and was working on a children’s book at the time of her death. At 94, she regularly communicated with family and friends via Facebook and email. Thurston was preceded in death by her parents Tracy and Helen Cook, her husband, Edward Thurston, her brother Dr. David Eisele Cook, her son John Thomas Thurston, her daughters Mary Anne Cassidy and Rev. Nancy Louise Tomlinson, and her grandson Anthony Tomlinson. She is survived by her son David Edward Thurston (Cathy), son-in-law, Rev. Paul Tomlinson, daughter-in-law, Sue Ellen Thurston, nephews David Cook and Christopher Cook, niece, Carol Gelina (Tony), grandchildren Edward Thurston, Laura Araujo (Josue), Christopher Tomlinson (Michelle), Rachael Wattanasak (Rut), Melissa Tomlinson, Patrick Cassidy (Kate), Timothy Tomlinson, Kwame Sakyi (Corinne) and her nine great-grandchildren

The family of Helen A. Thurston created this Life Tributes page to make it easy to share your memories.