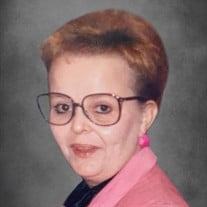 Helen Mae Stevens, age 75, of Colfax, WI passed away Wednesday, March 2, 2022, at Mayo Clinic Health System in Eau Claire, WI from complications of pneumonia. She was born Oct. 19, 1946, in Menomonie, WI to Kenneth and Mabel (Hendricks) Hintzman. Helen graduated from Menomonie High School in 1964. On April 10, 1965, she married Gary C. Stevens. Through this union one daughter Tammy Louise was born. In earlier years Helen enjoyed working at various cafés including Mable’s Café and the Menomonie Club. She then worked for over 30 years for the School District of Menomonie in the Food Service Department. After retirement, Helen and Gary moved to Lake Tainter where she enjoyed fishing from the dock. She also loved to cook and bake for family and friends, and she enjoyed an occasional trip to the casino. Helen loved to crochet afghans which she gave away to family, friends, churches, and nursing homes. She especially enjoyed spending time with her children, grandchildren, other family, and friends. Helen was fun-loving and quite a character who loved jokes and laughter. She will be greatly missed by so many. Helen is survived by her daughter Tammy (Daniel) Luther of Hendersonville, NC; two grandchildren, Brandon (Amy) Luther of Menomonie, WI and Brittany (Sean) Riedell of Cameron, WI; four great-grandchildren, Chaz, Dominic, Ayden and Maddi; a sister Judi (Gari) Spagnoletti of Menomonie, WI and sister Barbara (Fred) Drinkman of Downing, WI, Barbara died four days after Helen on Mar. 6th; sister-by-choice Hazel (Jerry) Hughes of Menomonie; brother-in-law Danny Jo (Deb) Stevens of Pine City, MN; sister-in-law Diane (Gary) Leach of Downsville, WI; along with many nieces, nephews, and special friends on the lake. She was preceded in death by her husband Gary C. Stevens in 2016; her parents, Kenneth and Mabel Hintzman in 2004; her in-laws, Arland and Lois Stevens; sister-in-law Darlene Hester in 2019; also, niece and nephews, Wendy, Tim, Andrew Mickelson. Due to Helen’s wishes, there will not be any formal funeral. There will be a Celebration of Helen’s Life from 11:00 a.m. to 1:00 p.m. on Saturday, June 25, 2022, at Olson Funeral Home in Menomonie, WI.

The family of Helen M. Stevens created this Life Tributes page to make it easy to share your memories.