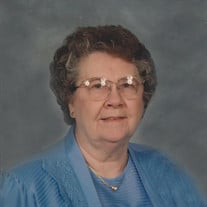 Helen D. (King) Jeske, age 90 formerly of Glenwood City, passed away peacefully on Sunday, November 29, 2020, at The Neighbors of Dunn County in Menomonie, WI. Helen was born on January 4, 1930, in Ramsey Co. St. Paul, MN the daughter of Gayland and Margaret (Kegan) King. At the age of five, Helen’s family moved to Wisconsin. She lived with her grandmother Agnes Kegan and went to first grade at Irish Ridge School. Later her family bought a farm in Boyceville where she attended grade school. In 1942, her mother moved the family to Glenwood City. At the age of 12 Helen went to live in Rice Lake to take care of her grandma Bessie King. She attended 7th and 8th grades at Loveland School and Rice Lake High School her freshman year. She then moved back to be with her mother and attended Glenwood City High School. While working at the City Café Helen met Alvin Jeske, who had just returned home from WW II. They were married on August 17, 1946, in Glenwood City where they made their home and raised four children, Dianne, Geraldine, Ronnie and Arvid. Helen worked at Stella Cheese and Glenhaven Nursing Home. Later she worked at Fiber-Tech in Amery and retired from Circuitron, Inc. in Baldwin. Helen was a devoted mother and grandmother. Any sport her children or grandchildren were in she would be there. She loved her Packers and enjoyed going to their games when they played the Vikings. Helen enjoyed bowling for Midway Café and Connie’s Catering and looked forward to her Vegas trips and her two week stays with her sister Edith in Nashville. Helen is survived by a daughter Geraldine (David) Wolbert of Menomonie; two sons Ronnie and Arvid (Jeannie) Jeske of Glenwood City; grandchildren, great-grandchildren, and great great-grandchildren; special close family friend Lynn Jeske and her brother Richard (Barbara) King, as well as many friends and relatives. She was preceded in death by her parents; her husband Alvin in 2009; a daughter Dianne Dittman in 2016; son-in-law Gene Dittman; two grandsons, Jeffery Dittman and Brayden Jeske; a great-granddaughter Caitlyn Mira Fregine; sisters, Shirley Smith and Edith Barr; brothers, Glen and Orville King; in-laws and other relatives and friends. The family would like to thank Eastbrook caregivers of the Neighbors of Dunn County – Menomonie for the care that was given. Graveside services will be held at 10:00 a.m. Friday, Dec. 4, 2020 at Glenwood City Cemetery, Glenwood City, WI with Pastor Jonathan Zielske officiating. Olson Funeral Home in Menomonie is serving the family.

The family of Helen D. Jeske created this Life Tributes page to make it easy to share your memories.