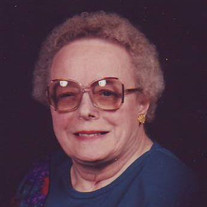 Hazel L. Ponto, age 90, of Menomonie, WI passed away Monday, November 24, 2014 at the American Lutheran Home in Menomonie. The former Hazel Lemke was born Sept. 13, 1924 to George and Anna (Stobb) Lemke in the Town of Red Cedar, Dunn Co. Wisconsin. A few years later the family moved to the city of Menomonie. Hazel was baptized and confirmed by Rev. John M. Woerth at St. Paul’s Lutheran Church. She attended Coddington Grade School and graduated from Menomonie High School in 1942. On Sept. 19, 1942, Hazel married Gilbert “Gib” Ponto in Rockford, IL while he was stationed at Camp Grant. Three daughters were born to them, Lucille, Ardith and Patricia. Hazel was a member of St. Paul’s Evangelical Lutheran Church where she was a Sunday School teacher for many years. She was proud to be a member of the Ladies Auxiliary to VFW Post 1039 for many years, where she held a number of offices. She was also a member of the Patriotic Council of Dunn County. She enjoyed doing bookkeeping, sewing, playing cards and puzzle books. She also enjoyed visiting with family and friends. Hazel is survived by daughters, Lucille (Vaughn) Lierman and Patricia Kutney; four grandchildren, Randy (JoAnn) Lierman, Kevin (Sandra) Lierman, Bryn Lierman and Shawn Kutney; six great-grandchildren, Eric (Amanda), Jeff (Chelsea), Jason (Melissa), Alicia (Justin), Andrew and Cheyenne; great-great-grandchildren, Allyson, Brantly, Aubrey, Aaron, Evan and Braxton Lierman, and Ava and Brooklyn Waschbisch; one sister, Marlys Jones and one sister-in-law, Adeline Kothlow and many nieces and nephews as well as other relatives and friends. She was preceded in death by her parents; her husband Gilbert on June 22, 2002; daughter, Ardith Rogers; granddaughter, Tamara Rogers; three sisters, Margaret Kortz, Doris Emerson and infant Mabel. Funeral services will be held at 11:00 a.m. Saturday, Nov. 29, 2014 at Olson Funeral Home in Menomonie, with Pastor Brett Voigt officiating. Burial will be in St. Paul’s Lutheran Cemetery in the spring. There will be visitation from 9:00 a.m. until the time of the service on Saturday at the funeral home.

The family of Hazel L. Ponto created this Life Tributes page to make it easy to share your memories.