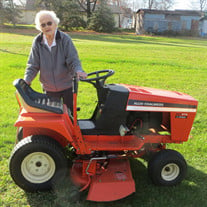 Hannah Wilma Rubusch, age 100, a long-time resident of Boyceville, WI, passed away quietly at home on December 9, 2018. She was born June 25, 1918 on a farm near Elk Mound, WI to Albert and Emelia (Cook) Hagen. They later moved to Menomonie, WI where she attended Menomonie schools, Hannah was confirmed at St. Paul’s Lutheran Church in Menomonie by Reverend Mittelstadt. She married Willard Rubusch on October 26, 1940 and went to live in Boyceville where Willard was employed at Olbert Brothers Farm Equipment Company. Willard joined the U.S. Army in September of 1942 and was discharged in October of 1946. In October of 1942, Hannah got a job clerking at Isaac Mohonna’s store in Boyceville. She later went to work at Erickson’s store until 1952. In 1952, the Rubusch Repair Shop was built next to the school on Tiffany Street in Boyceville. This later became Rubusch Sales and Service which was also a dealership for Allis Chalmers tractors. Willard and Hannah had built a small house on Race Street in 1941 which still stands across the street from her current residence. When asked recently how they lived in such a small house, she replied, “We didn’t need much as we were always at the shop.” Hannah was always an integral part of the business. She waited on customers as well as managing the office. She knew all of the parts and could give you just what you needed while being the most pleasant person you could ever meet. After Willard passed away in 1982, Hannah continued to run the business until 1989 when she sold it. After the shop was sold, Hannah traveled a bit. One of her most memorable experiences was a trolley ride in San Francisco. Hannah remained very active in later years. She drove to Downing every morning to have breakfast with friends until she was 95 or so. She also continued to mow her own lawn with her dependable Allis Chalmers lawn tractor until she was well into her 90’s. She was able to spend her final years at home with the aid of some caring and dependable helpers. Hannah is survived by a sister-in-law Katy Rubusch of Boyceville, WI, many nieces and nephews, great-nieces and nephews, as well as other relatives and friends. Also neighbor Michael Ludwig who faithfully watched over her and took care of many responsibilities for her. She was preceded in death by her parents, Albert and Emelia Hagen; her husband, Willard Rubusch; brothers, Henry and wife Hazel Hagen, Carl Hagen, and Herman Hagen; brothers-in-law, Harry and wife Clarice Rubusch and Harold Rubusch; sister-in-law Harriet and husband Arthur Grutt; and niece Joyce Hagen. Funeral services will be held at 11:00 a.m. Thursday, December 13, 2018 at United Methodist Church in Boyceville, WI with Pastor Shannon Mattison officiating. Visitation will be held at the church for one hour preceding the service at the church. Burial will be in St. Paul’s Lutheran Cemetery in the Town of Menomonie in Dunn County WI. Memorials are suggested to the United Methodist Church in Boyceville in memory of Hannah.

Hannah Wilma Rubusch, age 100, a long-time resident of Boyceville, WI, passed away quietly at home on December 9, 2018. She was born June 25, 1918 on a farm near Elk Mound, WI to Albert and Emelia (Cook) Hagen. They later moved to Menomonie,... View Obituary & Service Information

The family of Hannah W. Rubusch created this Life Tributes page to make it easy to share your memories.