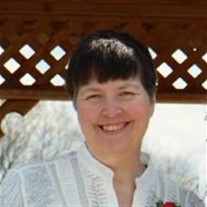 Gretchen C. Goetsch, age 59, of Menomonie, Wisconsin was lifted into her Heavenly Father’s arms on April 23rd, 2015 at Neighbors of Dunn County with hospice and surrounded by family. She was born on August 16, 1955 in Minneapolis, Minnesota to Earl and Virginia (Kuring) Gierke. Her faith-centered life began with her baptism at Christ Lutheran Church in Minneapolis and continued with her confirmation at St Paul’s Lutheran Church in Menomonie. Throughout her adult life, Gretchen was an active member of St Paul’s; teaching Sunday School to pre-school children, Vacation Bible School and Lutheran Pioneers for girls. In 1984 she was married to Michael Goetsch, who preceded her in his passing, as did her father. Gretchen is survived by her mother Virginia, and by her loving children and grandchildren; Ginnie (John) Prechel and their children Olivia, Oliver and Ofelia; and Nicholas, all of Menomonie. She is also survived by her siblings Timothy (Judith Burgess) of Appleton, Wisconsin and their children, Ryan (Rithie Luna) and their daughter Kimberly, Andrew, Molly, Laura, Kevin and Lily; Martin (Margaret Wild) of Stewartstown, Pennsylvania and Martin’s son Thomas (Sarah Arriola) of Redwood City, California and their daughter Olivia; Rebecca (Frank) Dosch of Prior Lake, Minnesota and their children, Christina and Eric; and Christopher of St. Paul, Minnesota and his children, Brittany (Mike) Morrison and their daughters Lucy and Eleanor, Alex and Makenzie, along with many more relatives and friends. A celebration of Gretchen’s joyful entry into her Heavenly home will be held at 3:00 p.m. Tuesday, April 28, 2015 in St. Paul’s Lutheran Church gymnasium with Pastor Brett Voigt officiating. There will be visitation in the gymnasium from 1:30 until the time of the service. Interment at St. Paul’s Lutheran Cemetery in Menomonie will follow. Memorials in her name will be gratefully accepted at St. Paul’s Lutheran Church. Olson Funeral Home in Menomonie is serving the family.

Gretchen C. Goetsch, age 59, of Menomonie, Wisconsin was lifted into her Heavenly Father&#8217;s arms on April 23rd, 2015 at Neighbors of Dunn County with hospice and surrounded by family. She was born on August 16, 1955 in Minneapolis, Minnesota... View Obituary & Service Information

The family of Gretchen C. Goetsch created this Life Tributes page to make it easy to share your memories.