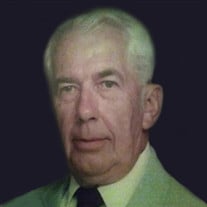 Gordon E. Skouge, 96, died on September 20, 2018. He was born in Menomonie, WI to Edwin and Ruth (Suckow) Skouge. He graduated from Menomonie High School in 1939. On March 24, 1943, Gordon and Carol Storing were married. In May of 1945 their daughter, Susan, was born. Gordon attended Stout Institute in Menomonie, WI, and after 3 years in the U. S. Army Air Corps he graduated from Stout in 1947. Gordon was employed in the banking business for 35 years. During this time, he was very active in the Menomonie community serving on the City Council, the School Board, the Dunn County Board, Town of Sherman Treasurer, the Rural Fire Commission, and the Dunn Co. Health Center Board. Gordon is survived by his sister, Joan Knutson, of Mahtomedi, MN and eleven nieces and nephews. He was preceded in death by his wife, Carol; daughter, Susan; his parents; his stepmother; his brothers, Ronald and Robert; special sister-in-law, Barbara Krause; and two nephews. Private graveside services will be held at Evergreen Cemetery in Menomonie with military honors by Menomonie Veterans Honor Guard. We are especially thankful to the Comforts of Home staff for their wonderful care of Gordon in his last years.

The family of Gordon E Skouge created this Life Tributes page to make it easy to share your memories.