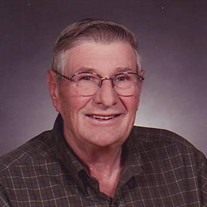 Gordon A. Anderson, age 79, of Wheeler, WI passed away Monday, March 9, 2015 at his home, after a courageous battle with cancer. He was born Jan. 11, 1936 in Colfax, WI to Lloyd and Bernice (Knoepke) Anderson. Gordon graduated from Colfax High School. Gordon enlisted in the U.S. Army during the Korean War, serving from 1955 to 1957, and was stationed in Korea. On Sept. 7, 1957, Gordon married the love of his life, Sandy Hainstock, in Colfax. Together they farmed on a dairy farm west of Wheeler for 32 years. After retiring from farming, Gordy worked at Cady Cheese for a few years. He also served on the town board, Westconsin Credit Union Board, ASCS Board and church council. For enjoyment, Gordy loved playing cards, shaking dice and woodworking. He was also an avid Wisconsin sportsman who loved fishing and hunting. He also enjoyed going to the casino with his grandson and spending time with his family. Gordon is survived by his children, Kent (Nancy) Anderson, Teri (Jeff) Riek, and Jill (Rand) Bates; grandchildren, Heather (Ted) Stabenow, Adam (Chelsie) Anderson, Jared Knutson, Lonnie Knutson, Joshua (Angie) Riek, Jacob (Cassie) Riek, Tyler Bates and Kayla (Mitch) Schuh; eight great-grandchildren; brothers and sisters, Marilyn Weaver, LaVerne “Buzz” (Judy) Anderson, Janice Scheidecker, Judy (Don) Kothlow; an aunt Arlene Knoepke and an uncle Elmer Knoepke; as well as many nieces, nephews, other relatives and friends. He was preceded in death by his parents; his wife Sandy; brothers-in-law, Alan Weaver and Ken Hainstock; sister-in-law, Neoma Toycen; also aunts, uncles and other extended family. A Memorial Service will be held at 11:00 a.m. Friday, March 13, 2015 at Our Savior’s Lutheran Church in Wheeler, WI. There will be visitation from 4:00 to 7:00 p.m. Thursday at Olson Funeral Home in Menomonie and at the church one hour prior to the service on Friday. Military Honors will be conducted at the church following the service. Burial will be in Our Savior’s Lutheran Cemetery in Wheeler at a later date.

Gordon A. Anderson, age 79, of Wheeler, WI passed away Monday, March 9, 2015 at his home, after a courageous battle with cancer. He was born Jan. 11, 1936 in Colfax, WI to Lloyd and Bernice (Knoepke) Anderson. Gordon graduated from Colfax High... View Obituary & Service Information

The family of Gordon A. Anderson created this Life Tributes page to make it easy to share your memories.