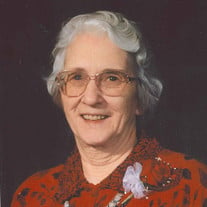 Gloria Coleman Larrabee, age 94, of Menomonie, WI, went to be with the Lord on January 27, 2016. Gloria was born in Eau Claire, WI, on March 10, 1921, to John and Ruth (Senff) Lahner. On January 25, 1939, she married Lee Coleman in Iowa. They made their home on the family farm in Menomonie, WI until 1961 when they moved to Minneapolis, MN. In 1972 they moved back to the family farm. This union was blessed with fourteen children. Gloria was widowed in 1976 and married Harold Larrabee on October 28, 1978. Gloria is survived by her sister Elaine Leirmo and brother George and by eleven children: Robert (Sharon Lee), Roger (Diane), Rueben (Darlene), Mary (James) Meyer, Rollie (Susan), Marlys (Arnold) Larson, Maureen (Michael) Newville, Ronnie (Patricia), Melody (Michael) Fraser, Michelle Coleman, Reginald (Beth) and daughter-in-law Diane (Ramon). She is also survived by 34 grandchildren, 69 great-grandchildren, and 1 great-great grandchild as well as many nieces, nephews, and other relatives and friends. She was preceded in death by her parents, brothers: Donald, Jerome, Derald, Ted, and Kenneth and her sisters: Alyce Smith, Eileen Thompson, and Teresa Fialkowski. Husbands Lee Coleman and Harold Larrabee also preceded her as well as three sons -Richard, Ramon, & Rand----four grandchildren-Barbara, Kathy, Michael, & Aaron ----and daughter-in-law Terrie Gloria was a homemaker, loved to read and play scrabble, and was active in leading Bible studies. Two highlights in her life were the two trips she made to the Holy Land. Her legacy is her love for the Lord and her family. Funeral services will be held at 11:00 a.m. Saturday, January 30, 2016 at Immanuel Baptist Church in Menomonie. Burial will be at Forest Center Cemetery, Twp. of Spring Brook, Dunn County. Visitation will be from 4:00 p.m. to 7:00 p.m. Friday at the church and also one hour prior to the services on Saturday. Olson Funeral Home in Menomonie is serving the family.

The family of Gloria K. Coleman Larrabee created this Life Tributes page to make it easy to share your memories.

Gloria Coleman Larrabee, age 94, of Menomonie, WI, went to be...