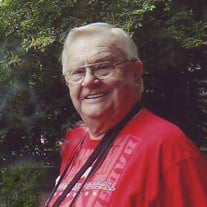 Glenn Russell Frank, age 88, of Menomonie, WI passed away Sunday, September 13, 2015 at Comforts of Home Memory Care in Menomonie. He was born August 13, 1927 in Racine, WI to G. Russell and Lilah (Meyer) Frank. Glenn was raised in Racine, graduating from Washington Park High School in 1945. He was drafted into the Navy in 1945 and was honorably discharged when W.W.II ended in 1946. Glenn continued his education at North Central College in Naperville, IL graduating in 1950. He graduated from Marquette University Dental School in Milwaukee, WI in 1954. He then established his dental practice in Menomonie in 1954. He was a member of the Wisconsin Dental Association and the Northwest District Dental Association. Glenn retired from dentistry in 1994 after 40 years. Glenn joined the Menomonie Lion’s Club in 1956 and was a member for 58 years. On November 24, 1962 Glenn married Judith M. Schroeder at Evangelical United Brethren Church in Menomonie. Three children were born to this union: Steven, Timothy and Linnae. Glenn looked forward to deer hunting each November with his son Tim, daughter Linnae, granddaughter Ashley and good friends, Bill Grambo and Len Frank. He was an avid golfer and was proud of his three holes-in-one. After retirement, he and Judy delivered meals on wheels for 15 years. Glenn is survived by his wife of 52 years, Judy; his children, Steven (Lisa) Frank, grandchildren Andrea, Brett and Ryan of Pittsburgh PA, Timothy Frank and granddaughters, Ashley and Kirsten of Deerfield and Madison WI and Linnae Frank of Menomonie. He is also survived by sisters, Marian Halverson of Centennial CO, Lorraine Spong Scoville of Naperville IL, and Virginia (Richard) Lambrecht of Janesville WI and several nieces and nephews. He was preceded in death by his parents; sister Jeannette Jorgenson, nephew Craig Halverson and brothers-in-law Arthur Jorgenson, Donald Spong, Ronald Scoville and Elmo Halverson. A celebration of life will be held at 12:00 p.m. Thursday, September 17, 2015 at Olson Funeral Home in Menomonie with burial at Cedar Falls Cemetery, Twp. Red Cedar, Dunn County, WI. There will be a visitation from 10:00 a.m. until the time of service. The family would like to thank the staff at the Dunn County Health Care Center and Comforts of Home Memory Care for the kind and compassionate care Glenn received since 2010.

The family of Glenn R. Frank created this Life Tributes page to make it easy to share your memories.