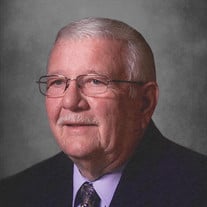 Glen H. Fisher, age 80, of Menomonie, WI went to meet the love of his life on Tuesday, June 14, 2022. He was born on October 20, 1941 in Menomonie to Herbert H. and Edna M. (Harnisch) Fisher. Glen married the love of his life Donna J. Bowell on July 24,1959 at Peace Lutheran Church in Menomonie, WI. To this marriage three sons were born, Vincent, Bradley, and Kendall. Glen attended Menomonie High School and Chippawa Technical College. He was employed in the dairy field his entire life starting at Maple Hill Dairy in Menomonie. Later Glen was employed at Sanna Dairies (Con Agra) from 1961 to 1974. Glen Joined the DeLaval Separator company (GEA) in 1974 this career was for 35 years working as process engineer. During this period Glen worked throughout the United States, Mexico, Canada, New Zealand, South America, and Denmark. Glen always was up for a challenge and enjoyed what he did. His greatest joy was his family. Glen and Donna traveled every year throughout the U.S. and Canada. The greatest trips were to A1aska, and Hawaii. He also enjoyed his automobiles of which he had many and he enjoyed working around his home in the town of Red Cedar. Glen is survived by his three sons, Vincent (Dawn) of Maplewood MN; Bradley of Menomonie, WI; and Kendall (Christine) of Appleton, WI. He is further survived by five grandchildren Kyle of Stillwater, MN; Naiomi (Ehren) of Maplewood, MN; Holly (Tim) of Hastings; Zach of Appleton, WI; Shelby of Appleton WI; and brother-in-law Duane (Mary) Bowell. Glen was preceded in death by his wife Donna in 2017, his parents, brother Charles, and sister Lois. A memorial service will be at 11:00 a.m. on Friday, June 17, 2022 at Peace Lutheran Church in Menomonie, WI. There will be a visitation one hour prior to the service at the church. Burial will be in Peace Lutheran Cemetery in Menomonie. Olson Funeral Home in Menomonie, WI is be serving the family.

The family of Glen H. Fisher created this Life Tributes page to make it easy to share your memories.