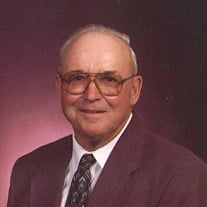 Gilbert D. Christianson, age 85, of Menomonie, WI passed away Sunday, July 24, 2016 at Mayo Clinic Health System – Eau Claire. He was born May 27, 1931 in Bruce, WI to Elmer and Mabel (Thaler) Christianson. Gilbert moved with his family to Menomonie in 1944 and graduated from Dunn County Agriculture School in 1949. On June 30, 1954 Gilbert married Rosemary Trainor at Our Savior’s Lutheran Church in Menomonie, where they have been long time members. Gilbert worked with Wisconsin Dairy Herd Improvement Assoc. testing milk before serving in the U. S. Navy and the U.S. Marine Corp from 1951 to 1955. He continued with D.H.I.A. for several years before going to work at Menomonie Farmers Credit Union as an Ag Loan Officer from 1966 to 1983. Gilbert served on the Dunn County 4-H Meat Animal Committee. He also enjoyed making maple syrup, gardening and visiting with family and friends. Gilbert is survived by his wife, Rosemary; children, Dean (Debbie) Christianson of Eden Prairie, MN, Debby (Mark) Loughney of Hudson, Sue (Chuck) Berger of Marshfield, Rosalind Christianson (Gary Meyer) and David (Lisa) Christianson both of Menomonie; nine grandchildren, six step grandchildren, seven great-grandchildren and eight step great-grandchildren; his siblings, Marion Williamson of Menomonie, Audrey Bracher of Elk Mound, Myron (Mary) Christianson of Eau Claire, Lyle (Helen) Christianson, Calvin (Bonnie) Christianson and Victor (Sandy) Christianson all of Menomonie. He is also survived by nieces, nephews and other relatives and friends. He was preceded in death by his parents, Elmer and Mabel; a sister Carol Tischman and a brother Allen Christianson. Funeral services will be held at 11:00 a.m. Thursday, July 28, 2016 at Our Savior’s Lutheran Church in Menomonie with Pastor Heather Wigdahl officiating. Military honors will be conducted by Menomonie Veterans Honor Guard. There will be visitation from 4:00 to 7:00 p.m. Wednesday at Olson Funeral Home in Menomonie and at the church one hour prior to the service on Thursday. Burial will be in Lower Weston Cemetery in the Town of Weston, Dunn Co. WI.

The family of Gilbert D. Christianson created this Life Tributes page to make it easy to share your memories.