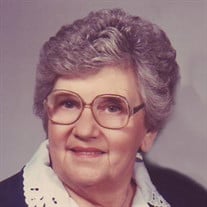 Gertrude Augusta Marie Boettcher, 95, of Menomonie, Wisconsin, passed away on Saturday, October 24, 2015, at Mayo Clinic Health System-Red Cedar in Menomonie, from cardio-renal failure following a year long battle with cancer. “Gertie” was born on November 20, 1919, in the Town of Weston, Dunn County, to H. Samuel and Eva (Lang) Kuesel. She was baptized on Christmas Day that year and on December 17, 1933, affirmed her faith through confirmation at St. John’s Lutheran in Hatchville, Wisconsin. Gertie was born and raised on the Kuesel Homestead in rural Dunn County and attended Pine Cooley School. Later, the Kuesel family moved to Menomonie and Gertie worked different jobs, including store clerk at the Farmer’s Store on Main Street. While employed there, Gertie met Eugene Boettcher. They were married at St. Paul’s Lutheran in Menomonie on September 4, 1944. For a short time, they lived and farmed just west of Menomonie near Hwy. 29, then moved to their own farm, two miles west of Menomonie on Hwy. 12. This would become the “Boettcher’s Place” for a generation. They milked dairy cows and sold eggs commercially for several years. Later, due to their children’s involvement in 4-H, they expanded to registered Holsteins and purebred Yorkshires under the “Achin’ Acres” namesake. This farm would be their “life” until 1977, when they moved into the City of Menomonie. Gertie worked as the hot lunch cook at St Paul’s Lutheran School in Menomonie and then for twenty years as a nurse aide at Memorial Hospital and Myrtle Werth Medical Center, retiring in 1982. Following Gene’s death in 1998, Gertie moved into “The Oaks” of Menomonie where she lived until her recent hospitalization. In her retirement years, Gertie was many things to many people. Gertie was “creative” as seen in her paintings, needlework, wood crafts, and crochet items. Gertie was “ hardworking” as witnessed through flower and vegetable gardens, baked goods for the holidays, sewing projects, quilts, canning, and stove top creations; Gertie was “community minded” as she volunteered as a 4-H leader, a “Tramway” homemaker, “Women of St Paul’s, Lutheran Women’s Missionary Society(LWMS), Hospital Auxiliary, and Oaks Craft and Activity Committees. Gertie was “fun-loving” and enjoyed snowmobiling as a charter member of the Wilson Creek Ridge Riders Club, bowling, card playing, wedding dances at the “400 Club, travels to the Rockies, Toronto, and Okinawa, following her children and grandchildren’s sports events, and cheering for the Green Bay Packers. Gertie was “loving and caring,” to her family, extended family, neighbors, doctors, and caregivers. If you knew Gertie, she always wanted you to be “okay.” Above all, Gertie “lived her faith.” as witnessed in her daily devotions and prayers. Survivors include her son, Thomas (Jo) Boettcher of Hastings, MN, daughters, Sandra (John) Raines, of Columbus, ND, and Sheilah Boettcher of Hudson, WI; grandchildren; Robert Boettcher, Chaska, MN, Nathan (Kim) Boettcher of Foristell, MO, and Rebecca (Barry) Ray of Henderson, NV, one great-grandchild, Jackson Daniel Boettcher of Foristell, MO; brothers-in-law; John Boetcher, Eau Claire, WI; Donald (Carol) Boettcher, Waterford, WI; and Kenneth (Lyn) Boetcher, Graham WA; several nieces and nephews; special friends, Steve and Diane Brown, Menomonie WI, and Kristina, Colin and Callum Johnson, Seattle, WA. Gertie was preceded in death, by her parents, her husband, Eugene, brother, Alfred Kuesel, sister, Eila Renz; sisters-in-law Janet Leach and Margaret Gratz; brothers-in-law, Bert Boetcher, a Marvin Boettcher, and Harold Renz. Visitation will be held at Olson Funeral Home on Friday, October 30, beginning at 11:30 am, followed by a service at 2:00 pm at the funeral home with Pastor Brett Voigt officiating. Burial will take place at St. Paul’s Cemetery, Town of Menomonie. There will be a lunch to follow at “The Oaks,” 1320 12th Ave E. in Menomonie. Memorials may be designated to the Mayo Health Cancer Center of Eau Claire, WI, or St Paul’s Lutheran Church & School of Menomonie.

The family of Gertrude A Boettcher created this Life Tributes page to make it easy to share your memories.