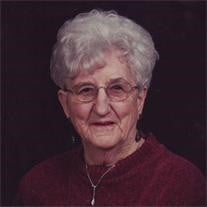 Geraldine (Jeri) Knaack - Thiede, age 92, passed away peacefully at her home on September 6th, 2014. She was surrounded by and lovingly cared for by her family during this time. She will be sadly missed by her children, Dave (JoAnne) Knaack of Eau Claire, Jerald (Ann) Knaack of St. Germaine, Donita (Phil) Follen of Neillsville, Dianne (Bob) Wuethrich of Sun City West, AZ, Don (Susan) Knaack of Menomonie, Janet Malnory of Eau Claire and Randy (Rita) Knaack of Menomonie. Jeri has 19 grandchildren and 30 great grandchildren. Preceding her in death were her parents, her husbands, Herbert Knaack, Art Gilberts and Ralph Thiede and her four brothers, Art, Ralph, Keith and Verne Stephens. Jeri was born June 6, 1922 in Dike, Iowa to Eva and William Stephens and was raised in Boyd, WI. She graduated from Whitehall High School and attended and graduated from Eau Claire State Teachers College. She taught school at St. Katherine's Elementary School in Beyer Settlement for a short time before meeting a wonderful man, Herb Knaack. They were married in 1942. Herb and Jeri ran a farm and created a very successful business, "Knaack's Advertising" that they owned for 38 years. After Herb passed away in August of 1980, their son Randy continued the business allowing Jeri to retire. Jeri lived life to the fullest, raising seven children and working many long hours in her office at their home. While young, she had been an avid dancer and bowler. She kept very busy and active with the Cedarlings 4H Club, the Red Cedar Homemakers and Ladies Aide at St. Paul's Lutheran Church. Later, her favorite past times were playing bridge and golfing with her wonderful friends. She also enjoyed watching professional football (especially the Packers). Rarely did she miss a radio broadcast of the Menomonie High School Football team and Coach LaBuda. As Jeri's body began to fail the past couple of years, she was especially nurtured by her very special family members. Without the love and everyday commitment of her son Randy and his wife Rita, daughter Donita and Dianne, son Don and granddaughter Tiffany, she would not have been able to continue living at her home. In her final days she passed away in the privacy of her home surrounded by lots of special family members. During her last 2 weeks before passing, her family was assisted with cares by St. Croix Hospice. They were fabulous! The family would especially like to thank them for their kindness and expertise. Jeri especially enjoyed their visits and prayers Until her final breaths, she remained delightful and very appreciative for her wonderful care provided by Hospice and her family. One of her greatest sources of joy were her children and her grandchildren and being entertained by the Barbershop Quartet "Chips" in which her son Randy is a member. She also took great pride in her son Randy as the "Mayor" of the City of Menomonie, reading about the City Council meetings in the newspaper and collecting articles for her scrapbook. Visitation will be at Olson funeral Home in Menomonie from 5 PM to 7 PM on Wednesday, September 10th. The funeral service will be held at 11 AM at Our Savior's Lutheran Church in Menomonie on September 11th with viewing an hour before the service. Burial will take place at St. Paul's Lutheran Cemetery in Menomonie. A luncheon and continued fellowship will be held at the church following the service.

Geraldine (Jeri) Knaack - Thiede, age 92, passed away peacefully at her home on September 6th, 2014. She was surrounded by and lovingly cared for by her family during this time. She will be sadly missed by her children, Dave (JoAnne) Knaack... View Obituary & Service Information

The family of Geraldine Knaack Thiede Obituary created this Life Tributes page to make it easy to share your memories.