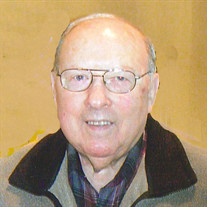 Gerald (Jerry) John Hillman, age 85, of Menomonie, WI passed away January 22, 2018. He was born January 27, 1932 in Spring Brook to John and Martha (Eighmy) Hillman. He grew up in the area and attended Menomonie High School, graduating in 1951. He played basketball during his high school years, including a state tournament berth his senior year. It was Menomonie’s first return to the state tournament since 1928. Jerry married Diane Lestico on August 8, 1970, at Peace Lutheran Church in Menomonie, and they lived together in the Menomonie area. Jerry was a licensed pilot, and flew his first solo flight on June 20, 1957. His most memorable flight was to the Rose Bowl in Pasadena, California in 1959. Jerry worked at Anderson Windows, Menomonie High School, and 3M, before he finished his career with a 23 year stint in sales at Lawson Products. Jerry was a lifelong sports fan of Menomonie High school, the Wisconsin Badgers and the Green Bay Packers. Jerry’s other interests included deer hunting with family and friends, fishing, playing cards, watching Nascar racing and camping. Jerry is survived by his two sons, Christopher (Amy) Hillman of Brooklyn Park, MN and Mark (Lacey) Hillman of Menomonie; and four grandchildren, Kailee, Taylor and Sam of Brooklyn Park and Kiptyn of Menomonie. He is also survived by his sister-in-law Jackie, and several nephews, nieces and other relatives and friends. He was preceded in death by his wife, Diane, his parents, John and Martha, his father-in-law and mother-in-law, George and Rose Lestico; three brothers, Donald, Lionel and Marvin, one sister, Leola; four sisters-in-law, Sarah, Pauline, Peg and Vivian; one brother-in-law, Cliff Wagner and two nephews, Jim Hillman and Everett Wilbur. A Masonic Service at 6:00 p.m. immediately followed by a Memorial Service with Pastor Kyle Gunderson officiating, will be held on Monday, January 29, 2018 at Olson Funeral Home in Menomonie. There will be visitation from 3:00 to 6:00 p.m. on Monday at the funeral home. Burial will be in Peace Lutheran Cemetery in Menomonie at a later date.

Gerald (Jerry) John Hillman, age 85, of Menomonie, WI passed away January 22, 2018. He was born January 27, 1932 in Spring Brook to John and Martha (Eighmy) Hillman. He grew up in the area and attended Menomonie High School, graduating in... View Obituary & Service Information

The family of Gerald J. Hillman created this Life Tributes page to make it easy to share your memories.