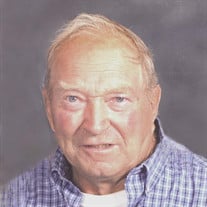 Gerald “Charlie” Larson, age 78, of Boyceville, WI passed away Sunday, March 13, 2016 at home. Gerald Jerome Larson was born Aug. 21, 1937 in Menomonie, WI to Selmer and Ruby (Grundman) Larson. Charlie attended Tramway School and was confirmed at Christ Lutheran Church. He married Charleen Schutts on Dec. 26, 1959 at Peace Lutheran Church in Menomonie. Together they raised four children, Dan, Buck, Jody and Sherry. At a young age Charlie learned his trade as an iron worker with his brother Mike. He later worked for Century Fence and also farmed with his wife Charleen since 1959, on her family farm. Charlie was a member of Christ Lutheran Church and Iron Workers Local 512 in Minneapolis. He played many hours of fast pitch and slow pitch softball with his brothers and cousins. His father and uncles were the famous Larson Nine. Charlie was a “Ford Man” through and through, always owning Ford cars, trucks, tractors and lawn mowers. He was a good mechanic who was able to fix just about anything. Charlie enjoyed many summers at the cabin and on the pontoon with family. He was an avid Packer and Badger fan. He adored his children and grandchildren and spent many days and evenings watching their sporting events. After retirement he still enjoyed helping on the farm and being a handyman. He will be sadly missed. Charlie is survived by his wife of 56 years, Charleen; four children, Dan (Melissa) Larson, Jerry “Buck” Larson (Jana Leidal), Jody (Robert) Rathke and Sherry (Larson) Leach; many grandchildren and great-grandchildren; brothers and sisters, Junior, Dick, LouAnn, Butch and Avis; and also survived by numerous nieces, nephews, other relatives and friends. He was preceded in death by his parents, Sam and Ruby; three brothers, Glen, Mike and Dwayne; one sister Janet; granddaughter Kayla Leach; two brothers-in-law, Donald and Duane Schutts; sisters-in-law, Marie Larson, Shirley Larson and Dolores Schultz; nephews, Tim Larson and Randy Larson; niece Rhonda (Behling) Huber; and many aunts and uncles. Funeral services will be held at 1:00 p.m. Friday, March 18, 2016 at Christ Lutheran Church in Menomonie, with Pastor Jeanne Warner officiating. There will be visitation from 4:00 to 8:00 p.m. Thursday at Olson Funeral Home in Menomonie and at the church one hour prior to the service on Friday. Burial will be in Tramway Cemetery in the Town of Menomonie, Dunn Co. WI.

The family of Gerald "Charlie" Larson created this Life Tributes page to make it easy to share your memories.