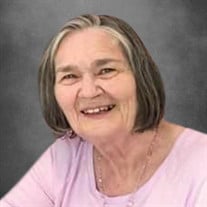 Georgene L. Britton Georgene Louise Britton was a caring wife, mother, grandmother, daughter, sister, and friend. She passed away on March 15, 2022, at the age of 81. She was born to Donald and Janet (Dahl) Wisner in Knapp, Wisconsin on September 12, 1940. While attending Menomonie High School, she was very involved in 4H, Luther League, choir, and band (where she played the oboe), as well as any sport they allowed girls to play at the time. Upon graduation, she moved to Durand, Wisconsin and worked at many businesses in town such as the Courier Wedge newspaper and working with Dr. Bryant. She then worked in the District Attorney’s office and met her husband, Roger Britton, Sr. They married on November 11, 1960. Together they had 5 children: James, Michael, Christopher, Roger Jr., and Susan. Georgene became the Undersheriff for Pepin County, serving for 22 years, while her husband held the position of Sheriff. Although she helped many people during her time as Undersheriff, one of the most rewarding parts of her work was when she served as an advocate for women involved with sexual assault. Later in her career, she held the position of Civil Process Coordinator for Eau Claire County until she retired. Throughout her career, she was a long-time member of the Wisconsin Sheriff’s and Deputy Sheriff’s Association. Georgene was a member of Eastern Star for over 50 years, a National Thespian, and volunteered with the American Cancer Society. She was very involved in her church bible study groups and felt they were like family. In addition, while in Durand, she served as a church council member at Faith Lutheran Church. She enjoyed learning from the Chippewa Valley Learning and Retirement programs where she took as many classes as she could. She was an avid reader, theater goer, and sports enthusiast. Not only was she proud to be a Green Bay Packer season ticket holder, but she was also even prouder of her children and grandchildren participating in activities. She attended their events whenever she could and would likely be the person cheering the loudest from the stands. She also enjoyed completing crossword puzzles, gardening, and bird watching. Georgene enjoyed hunting, fishing, and simply being outdoors. She donated to many charities such as Beaver Creek Reserve, the Pablo Arts Center, Feed My People, Ducks Unlimited and many more. She is survived by her children: James (Becky) of Eau Claire, Michael (Kristine) of Rice Lake, Christopher (Sarah) of Wilson, Roger (Marni) of Rice Lake, and Susan (James) Hoppe of Duluth, MN; her grandchildren: Vincent, Marnie, Alexander, Josephine, Bailey, Andi, Reese, Lane, Abigail, Brody, Addison, and Emma; siblings: Reverend Duane (Connie) Wisner of Fond du Lac, WI, Robert (Lisa) Wisner of Ashburn, VA; and many other relatives and friends. She is preceded in death by her husband, Roger, and her parents, Don and Janet. Funeral services will be held at 11:00 a.m. Monday, March 21, 2022, at Olson Funeral Home in Menomonie, WI with Pastor David Irgens officiating. There will be visitation at the funeral home one hour prior to the service. Burial will be in Christ Lutheran Halvorson Cemetery in Menomonie.

Georgene L. Britton Georgene Louise Britton was a caring wife, mother, grandmother, daughter, sister, and friend. She passed away on March 15, 2022, at the age of 81. She was born to Donald and Janet (Dahl) Wisner in Knapp, Wisconsin on September... View Obituary & Service Information

The family of Georgene L. Britton created this Life Tributes page to make it easy to share your memories.