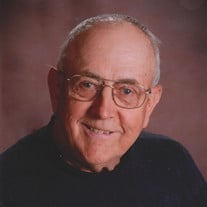 George Herman Nelson of Menomonie, Wisconsin died on January 24, 2020, at Luther Mayo Hospital in Eau Claire, Wisconsin. He was 84. George was born on December 13, 1935, to James (Ken) Nelson and Signe Linnea (Wickstrom) Nelson. He graduated from Superior East High School in 1953 and from Superior State College in 1957 with a Bachelors degree in Biology, and minors in Physical Education and Geology. He continued his education at Colorado State University in Fort Collins, Colorado, graduating in 1966 with a Master’s Degree in Microbiology, and all-but-dissertation toward his Doctorate degree in Immunology. George taught Biology and Physical Education in Washburn, Wisconsin, where he was known as “Coach” because he coached all athletic programs in the school. He also taught in Rice Lake, WI. After moving to Colorado for his graduate work, he began his career as a Professor at UW Stout in the Biology Department, teaching Food Microbiology and related classes, working with many graduate students over the years, and as chairman of the Biology Department for most of his 30-year career. He retired in 1997. He also consulted at many food processing plants like Sanna Dairies, DHI, Land O’Lakes, and Hunt Wesson, among others. In 1961, George married Dorice A. Johnson, and together they raised three kids; Craig, Connie, and Marcia. They were married for 37 years. George married Yvonne (Boller) Hartz on July 29, 2000. George had many passions in life. As a young man, he farmed in Poplar, Wisconsin, and loved the connection to nature and the companionship and teamwork that farming inspired. George was an avid hunter and fisherman, and an impressive student athlete. His successful high school basketball career as a 6’ 7” center earned him a full-ride college scholarship and the opportunity to continue playing. He spent a great deal of time perfecting his woodworking skills, building new kitchen cabinets for his mother while he was still in high school, a house for his family in Menomonie, and the log cabin in Poplar that became the all-season gathering place for family and friends. He built trophy cases, furniture, intricately detailed dollhouses for his granddaughters, the “Taj Mahal” deer stand, buildings, garages, and tongue and groove ceilings, among other things. He also volunteered as a builder and construction manager for Habitat for Humanity. He earned many honors for his work with the Wisconsin Lab Association, as an educator, and volunteer. In 1985, he was inducted into the UW Superior Hall of Fame, as an “Outstanding basketball player, Successful educator, A leader of men, 1953 Wisconsin State All-Tournament Team, and UW-Superior team captain.” Even with all his degrees, accolades, and awards, his relationships with his family and friends were always the most important. George is survived by his wife, Yvonne; son Craig (Brenda) Nelson of Eleva, WI; daughters Connie Nelson Guenther of Dayton, MN, and Marcia Nelson of Superior, WI; stepson Christopher (Megan) Hartz of South Bend, IN, and stepdaughter Katrina (Marvin) Taylor of Newport, MN; his sisters, Gloria Johnson, Karin (Bill) King, and Cynthia Grothe, all of Lake Nebagamon, WI; sisters-in-law Judy (Arlen) Christenson, Mary Heie, and Patricia (John) Woyczik, Jackie Boller; and brothers-in-law Richard (Laura) Johnson, David Johnson, John (Darleene) Boller, Charles ( Jan) Boller, Mark (Gail) Boller, and Steven (Sherry) Boller. He is also survived by 11 grandchildren: Kacey Guenther, Erika Guenther, Adrienne (Addie) Guenther, Samantha Nelson, Ella Hartz, Peter Hartz, Adam Hartz, Sophia Hartz, Zeb Taylor, Chester Taylor, and Everest Taylor. He has many beloved nieces and nephews. George was preceded in death by his parents, brothers-in-law Frank Johnson, Dale Grothe, and Jerry Boller, and grandson Joseph Hartz. Funeral arrangements have been made by Olson Funeral Home with visitation at Olson’s on Friday, February 14 from 4-7 pm, and the funeral mass at St. Joseph’s Catholic Church in Menomonie on Saturday, February 15, at noon with Father John Mano presiding. Visitation is one hour prior at the church. In lieu of flowers, donations are appreciated at: Stepping Stones of Menomonie Habitat for Humanity St. Joseph’s Catholic Church Epidermolysis Bullosa Research Fund, https://makingagift.umn.edu/give/fund.html?fundCode=11784 or University of Minnesota Foundation, PO Box 860266, Minneapolis MN 55486 (Specify EB Research) Many thanks to all of George’s caregivers at the Neighbors and Menomonie and Luther Hospitals for your care and support.

The family of George H. Nelson created this Life Tributes page to make it easy to share your memories.