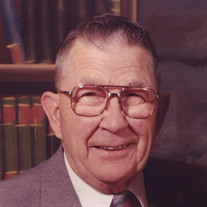 George Bernhardt Larson, age 101, of Menomonie, WI passed away Sunday, March 15, 2015 at the American Lutheran Home in Menomonie. Mr. Larson was born Sept. 16, 1913 on the home farm in Dunn County, WI to Ole J. and Anna M. (Alseth) Larson. On April 9, 1937, George married the former Eleanora A. “Ellie” Scheel at Peace Lutheran Church in Menomonie and they celebrated their 75th wedding anniversary in April of 2012. They owned and operated the Tramway Store (Larson’s Grocery) located at the intersection of Highway 12 and 79, west of Menomonie. George was a graduate of the Dunn County Agricultural School, Dunn County Normal School, received a two year teaching certificate from the University of Wisconsin – Madison, attended Stout Institute of Technology, and the Teacher’s College at Superior. He also attended various summer school sessions at the University of Wisconsin – Eau Claire and received his Bachelors of Science degree in education in 1960. He continued to pursue his education and received a Master of Science in Guidance at the University of Wisconsin – Stout in 1964. George taught school at Elk Creek Lake, Amy School, Shell Lake, and South Range High School in Superior. He taught school for 42 years, 29 of which were with schools in the Menomonie School District. He was most remembered for his time as an educator and mentor at Knapp School. From the age of 15 through 43, George played baseball. He showed free movies in many small towns, in the Menomonie area for many years. He was also a member of Menomonie Moose Lodge 1584 and a longtime member of Christ Lutheran Church. George loved his family and will be sadly missed. George is survived by his children, Larry (Linda) Larson of Fort Walton Beach FL, Ronald (Gloria) Larson of Menomonie WI, James (Pat) Larson of Fennimore WI; ten grandchildren; sixteen great-grandchildren; as well as nieces, nephews, other relatives and friends. He was preceded in death by his wife of 75 years, Ellie Larson; his parents, Ole and Anna Larson; two sisters and their husbands, Julia and Levi Teegarden and Viola and Frank Stewart; eight brothers and their wives, Selmer and Ruby, Oscar and Irene, Carl, Boyd, Andrew and Myrtle, Louis and Edith, William and Beverly and Roy and Margaret Larson. Funeral services will be held at 11:00 a.m. Saturday, March 21, 2015 at Christ Lutheran Church in Menomonie, with Pastor Geoff Scott and Pastor Mike Shay officiating. There will be visitation at the church from 9:00 a.m. until the time of the service. Burial will be in Tramway Cemetery in the Town of Menomonie, Dunn Co. WI.

The family of George Bernhardt Larson created this Life Tributes page to make it easy to share your memories.