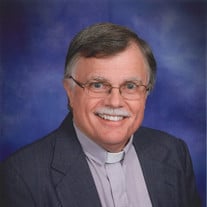 Rev. Geoffrey L. Scott. age 67, of Menomonie, WI passed away Tuesday, January 28, 2020 from complications of Alzheimer’s disease. His wife, children, and sister were with him. He was born July 27, 1952 in Minneapolis, MN to Clayton and Charlotte (Sideris) Scott. Geoff was raised in Edina, MN and graduated from Edina High before attending the University of Minnesota. In 1970, Geoff was one of the founding members of the John Phillips Sousa Memorial Band in Edina, which is still active today. It was there that he later met Kathy Trenter. On September 22, 1978 he married Kathy at St. Paul’s Episcopal Church in Minneapolis, MN, where they lived for a short time before moving to Wheeler, WI. Geoff was a technical writer for Cray Research and Honeywell. He later ran the technical writing firms of Weiser Scott & Associates and Menomin Communications. He also authored several children’s books. On August 29, 1999 he was ordained as a Lutheran pastor by the Evangelical Lutheran Church in America. He then served as pastor at Christ Lutheran Church in Menomonie until 2015. He was also actively involved in the Menomonie Police Department chaplain program. For many years Geoff played drums/percussion in Menomonie’s Ludington Guard Band and at shows at the Mabel Tainter Theater. Geoff is survived by his wife of 41 years, Kathy of Wheeler; his sister Elizabeth, of Colfax; a son, William Scott (Julie Quillen) of North San Juan, CA; daughters Emily (Joel) Hansen of Menomonie, Julia (Jon) Strand of Eau Claire, and Katherine Scott (Todd Hooper) of Norfolk, VA; and granddaughters Megan and Sarah Hansen and Lydia, Bethany, and Rachel Strand. He was preceded in death by his parents Clayton and Charlotte. Geoff’s family extends special thanks to the staff of Comforts of Home Memory Care Unit (Menomonie), Mayo Clinic Hospice Services, and Dr. James Walker of the Mayo Clinic, and requests that any memorials be directed to the Alzheimer’s Association. Funeral Services will be held at 11:00 a.m. Friday, January 31, 2020 at Our Savior’s Lutheran Church in Menomonie, with Pastor Heather Wigdahl officiating. There will be visitation at the church from 9:00 a.m. until the time of the service. Burial will be in Christ Lutheran Halvorson Cemetery in Menomonie.

Rev. Geoffrey L. Scott. age 67, of Menomonie, WI passed away Tuesday, January 28, 2020 from complications of Alzheimer&#8217;s disease. His wife, children, and sister were with him. He was born July 27, 1952 in Minneapolis, MN to Clayton and... View Obituary & Service Information

The family of Rev. Geoffrey L. Scott created this Life Tributes page to make it easy to share your memories.