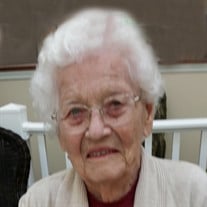 Genevieve Lambert, 103, formerly of Menomonie died Tuesday, Nov. 14, 2017, at Brentwood Senior Living in Rice Lake, Wis. She was the last survivor of her family’s generation which included her siblings and a multitude of cousins born in the late 1800’s to early 1900’s. Genevieve was born Dec. 20, 1913, in Withee, Wis., the fifth child of Samuel and Ida (Raether) Sorenson. Genevieve loved to tell tales of growing up in Withee and in Owen, Wis., where her family lived during her school years. She entertained her grandchildren and many others who also claimed Genevieve as “Gram,” with stories of life without a telephone, television or automobile. A favorite story was when Genevieve first saw an automobile and airplane. She loved to recount how the family would ride in a wagon, which was then made into a sleigh for the winter. Genevieve moved to Menomonie for her senior year of high school, graduating in the class of 1931. In 1933, Genevieve married Louis A. Sorenson and to this union two daughters were born. Wherever the family lived, Genevieve provided a comfortable home, a lovely vegetable garden in which she would can and freeze her produce. She was an excellent seamstress, sewing all the clothes for her daughters including their prom dresses. Her favorite gifts to give were home sewn aprons and quilts for babies. These treasures continue to be cherished by the fortunate recipients. In the summer of 1954, Genevieve and Louis purchased the former Trail Inn later known as the Knapp House. For the next 11 years, customers from near and far enjoyed Genevieve’s home cooked meals, delicious pies and popular Friday night fish fries. There was not a cookbook to be found in the establishment. Years later while making donuts with her granddaughter who asked about a recipe, her Gramma responded, “recipe, I made donuts everyday, I don’t need a recipe!” The couple later divorced and Genevieve became employed as a cook in the student union at UW Stout until her retirement. She was a favorite of the students, she enjoyed baking big trays of cookies to make them feel at home. Genevieve married Richard L. Lambert of Menomonie, they enjoyed 25 years together until his passing in 1996. They made a welcoming home at his residence, 321 13th St. Their large family and many friends enjoyed Genevieve’s delicious meals served with her stories of the olden days, family lore, sprinkled with common sense life lessons gleaned from decades of life, growing up poor and raising a family during the depression. This was followed by rousing games of cards, which Genevieve usually won with a whoop and a holler. She would often state she had “card sense.” Genevieve was a member of Knapp Methodist Church, Eastern Star and Daughters of Rebekah. Genevieve is survived by her daughters, Jacqueline Covey of Rice Lake and Nancy (John) Lambert of Bowdoin, Maine; her grandchildren, Brian (Sue) Covey, Lisa (Wade) Laufenberg, Dex (Faye) Covey, Ted Lambert, Tim Lambert and Karen (Covey) Clark and husband, Mark; eight great-grandchildren, and one great-great-grandchild. Genevieve is also survived by Richard’s children, James (Carol) Lambert of Cheyenne, Wyoming, Ann (Dan) Gudis of Bruce, Wis.; and grandchildren, Patricia Bauer, Peter Lambert, Kim (Paul) Zegler, Michael (Debbie) Burnett, Aimee (Lyndsey) Gudis, Shari Bice, Danny (Yvette) Utpadel, Debbie (Randy) Mandt, Becky (Terry) Schuster; and many step-great-grandchildren. Also survived by many extended relatives and a host of friends. Genevieve was preceded in death by her husband; parents; brother, Richard Sorenson; sisters, Gladys Scheel, Marguerite Konik and Amelia Clayman; her son-in-law, James W. Covey; grandson, Craig Covey; great-granddaughter, Tiffany Lambert; and stepdaughters, Sarah Irish and Mary Smith. A special thank you to Brentwood Senior Living Memory Care in Rice Lake for their loving, warm and professional care of Genevieve. A Celebration of Genevieve’s life will be held at 10:00 a.m. Saturday, June 9, 2018 at Olson Funeral Home in Menomonie. Burial will take place at St. Paul's Lutheran Cemetery in Menomonie.

Genevieve Lambert, 103, formerly of Menomonie died Tuesday, Nov. 14, 2017, at Brentwood Senior Living in Rice Lake, Wis. She was the last survivor of her family&#8217;s generation which included her siblings and a multitude of cousins born... View Obituary & Service Information

The family of Genevieve R. Lambert created this Life Tributes page to make it easy to share your memories.