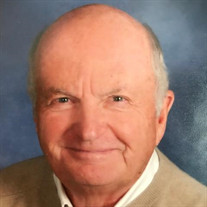 On Monday, January 18th 2021 Gene Hagen of Menomonie, WI passed away at age 81 in West Palm Beach, FL. Gene was born on February 17, 1939 in Superior WI to Lawrence and Inez (McLaughlin) Hagen. He graduated from Superior East High School in 1957 lettering in basketball, band and orchestra. After High School Gene attended UW Superior receiving a Bachelor of Science Degree with a major in Mathematics and a minor in Chemistry. He went on to receive Masters and Specialist Degrees in Secondary School Administration. Gene joined the Wisconsin National Guard at age 17and served from 1956-1962, including as an active duty medic in the Army’s Red Arrow 32nd Division stationed in Fort Lewis, Washington. Gene met the love of his life, Barbara Joan (Isaacson), in high school and they were married on April 16, 1960 in Superior, WI. Throughout his life Gene was passionate about his contributions to education and public service. After serving on active duty in and completing his college education he began his career teaching Mathematics in Chippewa Falls and Beaver Dam, WI. His training and recognized skills as a leader led to his appointments as Assistant Principal at the Beaver Dam Junior High School, followed by Principal of Wisconsin High Schools in Randolph and Menomonie. He devoted the last 23 years in public education as an Administrator and Vice President of the Chippewa Valley Technical School in Eau Claire, WI. Gene was most passionate about helping students struggling with traditional learning or with external barriers to succeeding in school and many expressed their gratitude for years after graduation. Gene viewed public service as a welcome responsibility. He provided community service through his long-term involvement in the Menomonie United Methodist Church, Menomonie School Board, Lions Club and Meals on Wheels. An avid camper, basketball player, golfer and bowler his smiling face was recognized in leagues across WI. A talented bowler, Gene was able to purchase the family’s first home after winning the Pin Bowl Tournament in Ripon, WI. He also had a beautiful voice, in addition to singing in the church choir his family will have lasting memories of hearing him sing old love songs to his girl Barb. In addition to the love Gene had for his wife Barbara, he showered love and compassion on his 4 children Scott (Natalie) of Madison, WI, Steve (Vickie) of North Oaks, MN, Susan of Lake Worth, FL, David (Aimee) of Eagan, MN and 9 grandchildren (Erin, Olivia, Meghan, Morgan, Miranda, Sydney, Bryant, Lauren and Leanne). He had a gift for touching the lives of all youth- particularly the most mischievous – and many outside the family considered him as a mentor and role model. Gene is survived by his twin sister Joan (Charles) Everson (Superior, WI) and preceded in death by his parents and 7 brothers and sisters. While his family and friends deeply mourn the loss of Gene, we are comforted by his lasting legacy of loving kindness and unwavering support. We all love you and will miss you. Donations in the memory of Gene Hagen may be made to the Menomonie United Methodist Church, Meals on Wheels, or a charity of your choice. A Celebration of Life will be held at 11:00 a.m. Saturday, July 10, 2021, at the United Methodist Church in Menomonie, WI. There will be visitation at the church one hour prior to the service. Burial with honors will be in Northern Wisconsin Veterans Memorial Cemetery in Spooner, WI. Olson Funeral Home in Menomonie is serving the family.

The family of Gene Hagen created this Life Tributes page to make it easy to share your memories.