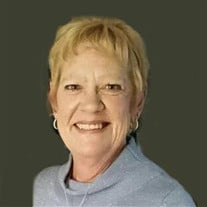 Gayle Diane Norstrud was born on January 12, 1959 in Forest City, Iowa to Vernon Elwood Norstrud and Dorothy Marie (Doyle) Norstrud. She was the last of four children and joined three brothers. She died suddenly at home on January 19, 2017 in Menomonie, Wisconsin. Gayle was baptized at West Prairie Lutheran church. She was raised in Thompson, Iowa and graduated from Thompson High School in 1977. Following graduation from high school, Gayle attended Mankato State University. On November 12, 1982 she married Thomas Maher. They made their home in Chippewa Falls, WI and in Winona, MN. While living in Winona, Gayle gave birth to her son, Nicholas Thomas Maher on June 22, 1988. In 1991, Gayle moved to Menomonie and began working for Northside Motors. She continued to work in the same location when Johnson Motors purchased the dealership. She put her heart and soul into work and cherished her Johnson Motors family. Gayle raised her son, Nick in Menomonie where he graduated from high school and from college. She was very proud of her son and was happy and joyful at his wedding in Bayfield, WI on September 4, 2016. Gayle loved spending time with family and friends in both North Iowa and in Menomonie. Gayle is survived by her son Nicholas Maher and his wife Anna of Duluth, MN, by her brothers, Kenneth (Judy) Norstrud, Donald (Faith) Norstrud and her sister-in law Chereen Norstrud. She is also survived by her uncle Richard Doyle and two aunts, Charlotte Hamlin and Vivian Wigen. Gayle had many close friends in Menomonie and in North Iowa. Gayle was preceded in death by her parents, Elwood and Dorothy Norstrud and by her brother, David Allen Norstrud. A Memorial Service will be held at 6:00 p.m. Tuesday, Jan. 24, 2017 at Olson Funeral Home in Menomonie, with Pastor Brent Juliot officiating. There will be visitation from 3:00 to 6:00 p.m. on Tuesday at the funeral home.

Gayle Diane Norstrud was born on January 12, 1959 in Forest City, Iowa to Vernon Elwood Norstrud and Dorothy Marie (Doyle) Norstrud. She was the last of four children and joined three brothers. She died suddenly at home on January 19, 2017... View Obituary & Service Information

The family of Gayle D. Norstrud created this Life Tributes page to make it easy to share your memories.