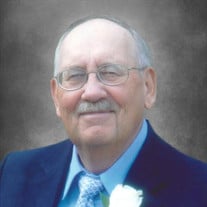 Gary D. Quilling, age 87, of Menomonie, WI, passed away peacefully June 2, 2022, at Comforts of Home Advanced Memory Care. He was born June 8, 1935, in Menomonie, WI, to Orville and Mabel (Doughty) Quilling. He grew up in Menomonie and graduated from Menomonie High School. Gary married Audrey (Harper) Anderson on October 18, 1958, at Our Savior's Lutheran Church in Menomonie, and welcomed her three children as his own. They completed their family with their son, Mark. After owning a bait shop and driving truck for Snowflake Foods, Gary was employed as a firefighter with the Menomonie Fire Department from 1964 to 1982. While employed as a firefighter, Gary worked part-time as a TV repairman, and started Menomonie Antenna Service, which he owned for many years. After working as a firefighter, Gary worked as a Dunn County Sheriff's Deputy, a Prisoner Transport Officer for the Dunn County Jail, and a Game Warden. An avid fisherman, Gary was well-known for his fishing skills, often catching the limits of those fishing with him, after catching his own limit. He favored fishing in Canada, although a good number of fish (his favorite being the walleye) were caught in Lake Menomin and the Red Cedar River. A "jack of all trades," Gary was an accomplished artist and gardener and loved animals (especially raising chickens), playing cards and cribbage. Gary was also active with Masonic Lodge 164 F.& A.M for 47 years, and Worshipful Master in 1992. Gary is survived by his daughter, Julie Eckert, his son Keith (Lynette) Anderson, his daughter Laurie (Robert) Hickcox, and his son, Mark; ten grandchildren and 19 great-grandchildren. Gary is also survived by his brother Larry (Marlys), his sister Sherrie Rindal, his sister-in law, Kathleen Harper, and many nieces, nephews and friends. He is preceded in death by his parents, Orville and Mabel, his wife, Audrey, brother- and sister­in law, Don and Nancy Harper, brother-in-law, Ron Harper, son-in-law, Dan Eckert, and granddaughter-in-law, Jodi Anderson. The family extends heartfelt thanks to Dr. Rich, the wonderful staff at Comforts of Home, and Mayo Clinic Hospice staff. A masonic service followed by funeral services will be held at 11:00a.m. on Monday, June 13th, at Olson Funeral Home in Menomonie. Visitation will be one hour prior to the service. Burial will be at Salem Iron Creek Cemetery in the town of Spring Brook, Dunn County, WI.

Gary D. Quilling, age 87, of Menomonie, WI, passed away peacefully June 2, 2022, at Comforts of Home Advanced Memory Care. He was born June 8, 1935, in Menomonie, WI, to Orville and Mabel (Doughty) Quilling. He grew up in Menomonie and graduated... View Obituary & Service Information

The family of Gary D. Quilling created this Life Tributes page to make it easy to share your memories.