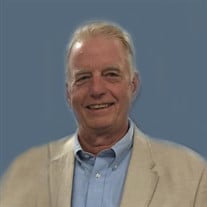 Gary L. Nyseth, age 76, of Menomonie, WI, passed away peacefully on Thursday, July 22, 2021, in his home surrounded by family. Gary was born November 10, 1944, to Gordon & Vi Nyseth. He grew up in Winona, MN, graduated from Winona High School in 1962, and continued his education at Winona State and Dunwoody Institute, majoring in Civil Engineering. He was drafted into the US Army stationed in Germany during Vietnam War Era. Gary was a dedicated employee for Cedar Corporation in Menomonie for most of his career, retiring in 2005. After Gary and Betty retired they moved to their lake house, where they enjoyed their time before moving back to Menomonie in 2019. During their retirement they spent winters in Arizona and summers in Wisconsin. Gary was a dedicated, caring, and fun-loving father who was always there for his kids. He cherished every moment he spent with his children guiding, teaching, and allowing them to grow into the wonderful individuals they are today. As a grandfather to 16 grandchildren, Gary especially loved the time he spent with them. Gary had many friends and was always thinking of others before himself. Gary married Elizabeth (Betty) Borgert on December 7, 1988, in Menomonie, WI, where they continued to raise their children. He filled his days with baseball, pickleball, fishing, golf, woodworking, and traveling the world. Through their yearly travels to Arizona for the winter, Gary knew all quilt store stops along the way. His woodworking skills built many boats, including his famous miniature tugboat. Gary was always busy with another project; there was never a dull moment. Gary is survived by his loving wife Betty, four children Jeff Nyseth, Amy (Dan) Gernes, Pete (Tammy) Nyseth and Christopher (Tiffani) Nyseth; three step-children Robert Hulbert, Cathy (Greg) Anderson, Mark (Katie) Hulbert; sixteen grandchildren Mitchell Nyseth, Emily Gernes, Caleb (Marie) Gernes, Zach Nyseth, Shawn Nyseth, Gavin Nyseth, Graiden Nyseth, Gwenyn Nyseth, Gerrick Nyseth, Daniel Hulbert, David Hulbert, Rachal Anderson, Kiel Anderson, Ryan Hulbert, Andi Hulbert, and Taylor Hulbert; his sister Annette Nyseth and brother David (Kathy) Nyseth. Plus many other relatives and friends. He was preceded in death by his parents, Gordon and Vi Nyseth, and cousin Thomas Nyseth. Memorial Services will be held at 1:00 p.m. Wednesday, July 28, 2021 at Peace Lutheran Church in Menomonie with Pastor Bob Friese officiating. Burial will be in the church cemetery with honors by the Menomonie Veterans Honor Guard. There will be a visitation from 4:00 to 7:00 p.m. Tuesday at Olson Funeral Home in Menomonie and also one hour prior to the service at the church on Wednesday.

The family of Gary L. Nyseth created this Life Tributes page to make it easy to share your memories.