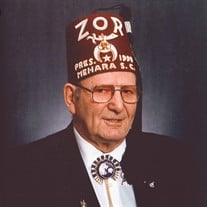 Galen W. Fox, age 87, of the Town of Weston, Dunn Co. WI passed away Monday, March 9, 2015 at his home. He was born January 18, 1928 in Pepin County, WI to William and Alice (Gilmore) Fox Jr. He graduated from Durand High School in 1948 and then served in the U.S. Army from 1950 to 1952. On Aug. 1, 1959, Galen married Patricia Trust in Shakopee, MN. Galen worked for the Breeders Co-op of Menomonie for a few years and then was a self-employed truck driver before driving for Moore Motor Freight and then 30 years with Indianhead Truck Line. During this time he also farmed with his wife in the Town of Weston. He was a member of the Masonic Lodge of Menomonie and Durand for 64 years. He belonged to the Zor Shriners, Mehara Shrine Club and the Scottish Rite. He was also a member of the Durand American Legion Post 181. Galen enjoyed camping and fishing when he was younger and he enjoyed 4-wheeling and playing cards, especially Euchre. He also enjoyed the camaraderie of the guys at the morning coffee group and he love spending time with his grandsons. Galen is survived by his wife, Pat; a daughter, Cathy (Kevin) Schulte; son, Greg; grandchildren, Ben Schulte (fiancé Victoria Kaduce) and Mitch (Autumn) Schulte; two sisters, Phyllis Lehman and Marlys (Halsey) Halls; a brother, Phillip (Jane) Fox; as well as nieces, nephews and other relatives and friends. He was preceded in death by his parents; two brothers, Warren Fox and Bill Fox; and a sister, Loretta Smith. There will be visitation from 1:00 to 4:00 p.m. Saturday, March 14, 2015 at Olson Funeral Home in Menomonie, with a public Masonic Service at 4:00 p.m. Burial will be in Forest Hill Cemetery in Durand at a later date.

The family of Galen W Fox created this Life Tributes page to make it easy to share your memories.