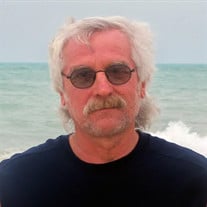 Galen Lee Burton, age 64, of Menomonie, passed away at home on Sunday June 5, 2016 due to complications of COPD and heart issues. Galen was born December 12, 1951, the son of Thomas and Violet (Turner) Burton. He attended the Menomonie area schools and graduated from Menomonie High School in 1969. He served in the US Army from 1970 to 1971 and was Specialist Fourth Class in the Battery B, 1st Battalion, 68th Air Defense Artillary in Fort Hood, Texas. He then worked at UW Stout as equipment manager at the field house. In 1976 Galen joined the Ambulance Service that was operated by Memorial Hospital which later became Menomonie Ambulance Service. For 26 years, Galen worked as an EMT and later as a Paramedic. In December 1989, he was appointed Director of the Menomonie Ambulance Service which later merged to the Menomonie Fire Department. He served the Menomonie area as a Firefighter II for a few years before he became disabled. Galen was a very caring and compassionate paramedic to both the patients and families he served. He carried the pain and suffering of others deep within himself until his passing. Galen married Yvonne Young with whom he had two children, Eric and Jessica. They later divorced and on August 20, 1983 he married Nanette LeMay at Peace Lutheran Church. Galen and Nanette were married for 33 years. They resided in a country home just east of Menomonie where Galen greatly enjoyed working on house and barn projects and just being outdoors. He was a talented man and made many improvements to the property. He built a wonderful tack room for Nanette’s horse equipment which she will forever cherish. He was an avid gardener for several years and took pride in his garden. He canned a fabulous spaghetti sauce from the garden tomatoes and thoroughly enjoyed to cook. He loved animals and over the years he enjoyed his potbellied pigs, goats, miniature donkeys, horses, dogs, rabbits, birds and cats. His favorite was camping and fishing. The family will cherish many fond memories of camping and fishing for walleye and musky at the Chippewa Flowage and spending time at the cabin in Clam Lake. He was so proud of the 48 incher he caught! He was a member of the Menomonie Saddle Club and even rode as a flag horse in the equestrian Drill Team Competition at Minnesota State Fair for one year (he did this only to make his wife happy). He never had an interest in football in his earlier years but became an avid Packer fan after attending a game at Lambeau. Galen had a great sense of humor and was always the life of the party. Galen is survived by his wife Nanette; son Kurtis, son Eric (Caitlin Fulcer); daughter Jessica (Jesse Bryan); five grandchildren, Brittany, Breanna, Cody, Colten, and Jackson; two great grandchildren Kingzley and Wesley, his mother Violet, brother David, and sister Debbie (Tim Johnson), sisters-in-law, Judy (Phil Nelson) and Kathy (Steve Rose), brother-in-law Alan (Patty Hansen) in addition to nieces, nephews, and many dear friends. His dogs Max, Samantha and Bentley kept him company during the days when Nanette worked…..He will be dearly missed by his family, friends and pets. He was preceded in death by his first wife Katherine McIntyre; father Thomas; his daughter Shanna; brothers, Dale and Jeff; in-laws Valentine and Lorraine LeMay. Visitation will be from 3-7 pm Thursday, June 9, 2016 at Olson Funeral Home in Menomonie with a service following at 7 pm. Olson Funeral Home and Cremation Service, Menomonie is serving the family.

Galen Lee Burton, age 64, of Menomonie, passed away at home on Sunday June 5, 2016 due to complications of COPD and heart issues. Galen was born December 12, 1951, the son of Thomas and Violet (Turner) Burton. He attended the Menomonie area... View Obituary & Service Information

The family of Galen L. Burton created this Life Tributes page to make it easy to share your memories.

Galen Lee Burton, age 64, of Menomonie, passed away at home on...