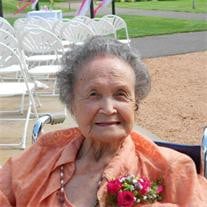 Fusako "Mickey" Andress, age 91, of Menomonie, died peacefully on Sunday, April 27, 2014 at American Lutheran Home in Menomonie. The former Fusako Tatemichi was born in Yokahama, Japan on February 20, 1923. On May 6, 1953, Fusako married Allen Andress at the American Embassy in Tokyo, Japan. They returned to Menomonie where they were longtime residents and raised their family. Mickey is survived by her children, Linda (David) Mathews, Deborah Buckley, Gary (Patti) Andress, Brenda McClelland and Bobby Andress; grandchildren, Christopher McClelland, Mikki (Josh) McCutcheon, Michael McClelland, Tina Andress, Stephanie Mathews and Adam Bird; great-grandchildren, Kena, Alayna Jane, Addison, McKenzie, Levi, Wesson and Rhiley; and her extended family Steve Stillman, Brad Schnitzler, Ken Pernsteiner, Sarah Arterberry and Kaydi Flug. She was preceded in death by her husband Allen. Mickey's family would like to thank the caring staff of the American Lutheran Home. Funeral services will be held at 11:00 a.m. Wednesday, April 30, 2014 at Olson Funeral Home in Menomonie, with Pastor Paul Pillman officiating. Visitation will be one hour prior to the service at the funeral home. "I dreamt last night you held my hand, But woke and you weren't there, And as the teardrops filled my eyes Your presence filled the air. I tried again to reach for you, But found you too far away, So I began to cry again, Waiting for the day. When I see you once again, I know just what I'll do, I'll gently grab you by the hand, To make my dream come true."

The family of Fusako "Mickey" Andress Obituary created this Life Tributes page to make it easy to share your memories.