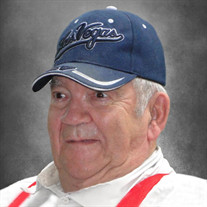 Freidrig H. Hitz, 93, of Bloomer Wisconsin, born June 1, 1929, to Benjamin and Georgia (Nauman) Hitz, passed away Saturday June 18, 2022, surrounded by his wife, Phyllis and his children. Fred grew up in Knapp, Wisconsin, the son of farmers, graduating from Woodville High School, May 20, 1948. He served in the US Army from 1949 to 1952 as a military policeman, stationed in Okinawa, guarding prisoners of the Korean War. When he returned from the military, Fred and three of his brothers, known as the Brothers Four, worked at the foundry in Waukesha, where Fred was a union steward. Fred farmed in Colburn, Chippewa County and raised eight children from his first marriage. Fred worked as a janitor at the Cadott Elementary School, from which he retired after 20 years. Fred Hitz and his wife Phyllis Lauderdale were together for 20 happy years. They were married June 27, 2009, at Duncan Creek Campground, where they spent many wonderful years together with their friends and family. Fred was always the life of the party, famous for always having chicken on the grill, resulting in the Rubber Chicken episode. Fred is survived by brothers Harold (Judy), Russell (Sue) and sister Kit (Arnold) Metze. He will also be sadly missed by son Friedrig “Lucky” (Carol) Hitz, daughter Roxane Leger (David Spores), son Jeff Hitz, son Dean (Laurie) Hitz, daughter Pam (Dan) Schmitt, son James (Amy) Hitz, daughter Christina Hitz (Daniel Weese), and son Jesse Hitz - and many nieces, nephews, multiple grandchildren and great grandchildren, other relatives and friends. Fred was preceded in death by his parents, brothers Donald, Irvin, Benjamin Jr. and sisters Carol Jean, Betty Mae, Mabel and Mary. Fred loved fishing, bowling, cribbage and family. Fred was a friend to everyone he met, an outgoing and deeply kind man, loved by many people. Funeral services will be held on Friday June 24, 2022, at 4:00 PM at Olson Funeral Home in Menomonie. Visitation will be from 3:00 PM to 4:00 PM at Olson Funeral Home. After the service a small luncheon will be served. Immediately following the luncheon interment will be at Teegarden Cemetery, where Fred will be buried with military honors conducted by Menomonie Veterans Honor Guard..

Freidrig H. Hitz, 93, of Bloomer Wisconsin, born June 1, 1929, to Benjamin and Georgia (Nauman) Hitz, passed away Saturday June 18, 2022, surrounded by his wife, Phyllis and his children. Fred grew up in Knapp, Wisconsin, the son of farmers,... View Obituary & Service Information

The family of Freidrig "Fred" H. Hitz created this Life Tributes page to make it easy to share your memories.