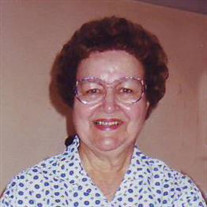 Frances Rosalie Gerth, age 88, of Menomonie, WI passed away Sunday, December 7, 2014 at her home. The former Frances Liljedahl was born Dec. 27, 1925 in Ogema, WI to Gustave and Agnes (Anderson) Liljedahl. She attended her first eight grades in a one room school house, then attended Westboro High School for one year and graduated after three years, from Prentice High School. Frances moved to Minneapolis, MN for employment and worked at the Forum Cafeteria and a sewing factory. In 1946, she moved to California for six months and then to Portland, OR where she was employed at the Pendleton shirt factory. She married Ralph Lowe in 1948 and later divorced in 1968. They moved to Minneapolis in 1950 where Frances worked at Lee overalls until the birth of her children. They moved to Menomonie in 1966 and in 1969 she was hired at U.W. Stout in food service and then later the custodial dept. where she met her present husband, Walter Gerth. They were married in 1983. Frances enjoyed reading, crocheting, watching T.V., fishing and going to garage sales. She also loved spending time with her family. Frances is survived by her husband, Walter; one son Donald (Debby) Lowe, one daughter Sharon (John) Michels; one step-son Brian (Joan) Gerth; three grandsons, Patrick Lowe, Thomas (Alicia) Michels, and Mark (Chealsey) Gerth; three granddaughters, Angela Lowe, Charisse (Nick) Sutliff and Cora (Andrew) Redd; six great-grandchildren, Spencer and Abbey Sutliff, Ashton, Gracie and Garrett Pool and Hudson Redd. She is also survived by other relatives and friends. She was preceded in death by her parents, Gustave and Agnes; a sister Deloris Ulrich; and four brothers, Roy, Roger and Oscar Liljedahl and infant brother Nels. Funeral services will be held at 11:00 a.m. Friday, Dec. 12, 2014 at Peace Lutheran Church in Menomonie with Diaconal Minister Heather Kistner officiating. There will be visitation at the church one hour prior to the service. Burial will be in Peace Lutheran Church Cemetery. Olson Funeral Home of Menomonie is serving the family.

The family of Frances R. Gerth created this Life Tributes page to make it easy to share your memories.