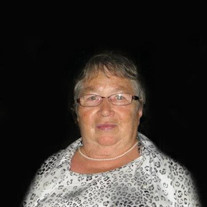 Florence F. Hoyt, age 79 of Knapp, WI, lost her courageous battle with cancer and passed away on March 19, 2018 ending her journey here on earth. Florence was born on February 13, 1939 to James and Genevieve Bignell of Arkansaw WI. She grew up on the family farm with 8 siblings. After graduating from Arkansaw High School, Florence met the love of her life, Robert Hoyt and were married on April 6, 1957. They were married for 61 years and had three children. Florence was a strong woman who believed in hard work and values. She was quick to help friends and family with a kind word and a smile. She touched the lives of many people with her selfless nature and friendship. Florence spent her whole life working in the food industry working at the Knapp House, Peppermill II, and Exit 45 restaurants. She was known for her exceptional baking and cooking skills. Florence never prepared a dish that wasn't a joy to eat. She enjoyed baking, gardening and traveling. Most of all she loved her family unconditionally. Bob and Florence made sure to take 2 weeks off every year when their children were growing up and they would load up the camper and traveled south or west to explore many wonderful areas around the country. In the summer they spent many weekends camping around the Wisconsin area. After retiring, Bob and Florence would take the camper and go south to Texas or Arizona for the winter. Florence is survived by her husband Robert, two children; Randy Hoyt and Sharon (Joseph) Susa, a daughter in law, Lori Hoyt, five grandchildren; Michael, Nicholas and Christopher Hoyt, Derek and Sheldon Susa, three great grandchildren; Salina, Brooke, Octavia Hoyt. And six brothers and sisters; Carl (Lynn) Bignell, Harvey (Rosie) Bignell, Gloria (Richard) Hoyt, Char (Ronald) Larrabee, Royal (Connie) Bignell and Franklin Bignell. She was proceeded in death by her parents James and Genevieve Bignell, sister Lorraine Hoyt, brother, James Bignell and eldest son Rodney Hoyt whom she deeply missed and has now been reunited with in heaven. Funeral services will be held at 11:00 a.m. Monday, March 26, 2018 at the Knapp Methodist Church in Knapp with Pastor Tim Vettrus officiating. There will be visitation from 2:00 p.m. to 5:00 p.m. Sunday at Olson Funeral Home in Menomonie and at the church one hour prior to the service on Monday. Burial will be in the Forest Hill Cemetery, Town of Stanton.

Florence F. Hoyt, age 79 of Knapp, WI, lost her courageous battle with cancer and passed away on March 19, 2018 ending her journey here on earth. Florence was born on February 13, 1939 to James and Genevieve Bignell of Arkansaw WI. She grew... View Obituary & Service Information

The family of Florence F. Hoyt created this Life Tributes page to make it easy to share your memories.