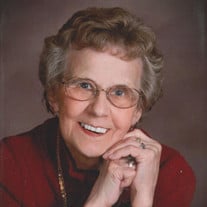 Eunice Ilene Freeberg, 87 of Colfax departed peacefully with her family by her side on Friday, May 29, 2020 at Colfax Health and Rehabilitation. Eunice Ilene was born on June 14, 1932 on the family farm to parents Oscar and Olga (Anderson) Lee. She was baptized and confirmed at Hay River Lutheran Church. Eunice attended Plainview School through the 8th grade and graduated from Colfax High School in 1950. On August 1, 1953 she married Daniel Freeberg of Colfax at Hay River Lutheran Church. To this union three children were born, Mike, Judy and Greg. Throughout the years Eunice held different jobs working at the Colfax Schools and retiring from UW-Stout. She was a strong woman of faith; and attended church at Colfax Lutheran Church where she was active in circle. She loved having family and friends over for coffee and homemade treats, sewing and doing crafts, reading the newspaper and going to thrift sales in town. Eunice is survived by two sons, Mike (Denise) Freeberg of Colfax, WI, Greg (Jodie) Freeberg of Windsor, CO; two grandchildren, Justin (Candace) Freeberg of Mobile, AL and Danielle (Trinston) Jeffries of Cheyenne, WY; two great grandsons, Matthew and Lucas Freeberg of Moblie, AL; sister Elaine Amble of Wheeler, WI; and brother and sisters-in-law, Chuck and Betty Freeberg of Colfax and Shirley Freeberg of Eau Claire, WI; numerous nieces, nephews, and other friends. Eunice was preceded in death by her parents, Oscar and Olga Lee, parents-in-law, Helmer and Olga Freeberg, husband Danny, daughter Judy, and foster brother LaVern and Norma Gustum. Family said it is hard to find the right words to describe such an amazing woman and hard to fathom that you are gone. For being so tiny you are one of the strongest women that we have ever met. Your selflessness and patience were admirable traits that we aim to work on ourselves. You were so sweet that it was impossible to not like you. No one would know it, but you were also one of the most stubborn people that we have ever known, and you kept your sense of humor handy in case you needed it. We will miss you so much but find comfort in knowing that you are with God and other family members. We truly need more people in the world like you! The family wishes to thank the staff of Colfax Health and Rehabilitation, and Jessica and Sara of the St. Croix Hospice for their wonderful care of Eunice. Memorial Services will be held at 11:00 a.m. Friday, July 23, 2021 at Colfax Lutheran Church in Colfax with Pastor Les Walck officiating. Burial will take place at Evergreen Cemetery in Colfax. Visitation will be one hour prior to the service at the church.Memorials can be directed to Colfax Lutheran Church, P.O. Box 425, Colfax, WI 54730 or the charity of your choice. Olson Funeral Home of Menomonie is assisting the family.

Eunice Ilene Freeberg, 87 of Colfax departed peacefully with her family by her side on Friday, May 29, 2020 at Colfax Health and Rehabilitation. Eunice Ilene was born on June 14, 1932 on the family farm to parents Oscar and Olga (Anderson) Lee.... View Obituary & Service Information

The family of Eunice I. Freeberg created this Life Tributes page to make it easy to share your memories.