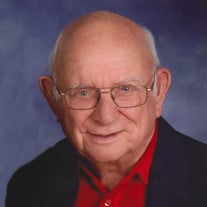 Eugene Willis Kraemer, age 87, of Menomonie, died Friday, July 1, 2016 at The Neighbors of Dunn County. Eugene was born on February 5, 1929 in Wakefield, Nebraska. His parents were Herman and Sadie Bell (Goshorn) Kraemer. He was baptized and confirmed at St Paul’s Lutheran Church in Concord, Nebraska. He attended Myrtle Creek Country School and graduated from Concord High School in 1946. He farmed with his father and brother, Frederick until being drafted in to the army in 1951. He served with the Seventh Division Signal Corp in Korea from 1952-1953. He married Gloria Gail Emry on August 14, 1954. Four years later they moved to Menomonie, Wisconsin where they purchased a farm. He became a licensed insurance agent in 1959, and worked in the insurance field for 56 years. He also sold real estate during this time. Over the years he served on the Menomonie School Board, American Lutheran Home Board, Our Savior’s Lutheran Church Council, CESA 5 Board, and Agency School Committee Board. He was a member of the Menomonie Lions Club and Kiwanis Club. Gene and Gloria have enjoyed traveling to many foreign countries with family and friends. Eugene played golf for many years and at the age of 75 he achieved a hole in one. Eugene loved watching sports and especially watching his grandchildren participate. Eugene is survived by his wife, Gloria; children, Robert (Donna) of Menomonie, David (Cindy) of Eden Prairie, Minnesota, Donna (Art) Barr of Sun City West, Arizona, Diane (Jon) Oakland of Menomonie; grandchildren, Ted Kraemer (Karen Stotts), Krystal (Patrick) Blesi, Benjamin (Christina) Oakland, Matthew Oakland, Thomas Oakland, Jasmine Kraemer and great grandson Clark Kraemer. He is also survived by his sister Carolyn (Verl) Carlson and sister-in-law Joleen Kraemer. He was preceded in death by his parents, his brothers Bill and Frederick Kraemer and an infant sister Joyce. Per Eugene’s request his remains were donated to the University of Minnesota Anatomy Bequest Program for research. Eugene and family wish to express their appreciation for the comfort and care provided for him by the staff at the Neighbors of Dunn County and Dr. Daniel Johnson. In lieu of flowers, the family prefers memorials to Our Savior’s Lutheran Church of Menomonie or a charity of the donor’s choice. Memorial services will be held at 11:00 a.m. Friday, July 8, 2016 at Our Savior’s Lutheran Church in Menomonie with Pastor Sarah Miller officiating. Military honors will be presented by the Menomonie Veterans Honor Guard. Burial will take place at a later date in Evergreen Cemetery in Menomonie. There will be a visitation from 4:00 p.m. to 7:00 p.m. Thursday at Olson Funeral Home in Menomonie and also one hour prior to the service at the church on Friday.

Eugene Willis Kraemer, age 87, of Menomonie, died Friday, July 1, 2016 at The Neighbors of Dunn County. Eugene was born on February 5, 1929 in Wakefield, Nebraska. His parents were Herman and Sadie Bell (Goshorn) Kraemer. He was baptized and... View Obituary & Service Information

The family of Eugene Willis Kraemer created this Life Tributes page to make it easy to share your memories.