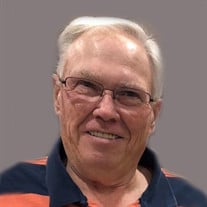 Eugene “Gene” Bilse, age 69 of Ridgeland, WI passed away Sunday, May 5, 2019 at MCHS-Barron surrounded by his loving family. He was born on February 3, 1950 to Harvey and Dorothy (Sipple) Bilse in Rice Lake, WI. He was baptized and confirmed at St. Paul’s Evangelical Lutheran Church in the Township of Prairie Farm. Gene grew up in the Ridgeland area and graduated from Barron High School. On July 28, 1973 Gene married Joan Higbie and became an instant dad to three beautiful girls, Tami, Tina and Tracie, who he adopted. Gene was a dairy farmer for many years and later in life worked at the Ridgeland Farmers Union. He was very active in the Ridgeland Community. Especially with his involvement with the Ridgeland Fair. He announced for both the demolition derby’s and the parades for the last 30 years. He was also very active in his church, being a Sunday School Teacher for 17 years and serving on the church council for 8 years. Most importantly, Gene was very involved with his children and grandchildren’s activities attending sporting events, concerts and school functions. Gene enjoyed many scooter rides and countryside travels with his wife; taking many trips to Arizona and his latest trips to Alaska and Niagara Falls. Gene is survived by his wife Joan of Ridgeland, three daughters Tami (Tim) Arnott of Oshkosh, Tina (Todd) Berg of Oconomowoc, and Tracie (Rick) McSorley of Strum; grandchildren Amber (Cher), James and Jessica Gallo, Alec, Jarek and Payton Berg, Maiya, Cade, Kyle and Isabel McSorley; great grandchildren Alizay, Hennesey, Belle, Anthony, Savannah and Brooklyn; brother Don (Carol) Bilse. He is further survived by brothers-in-law and sisters-in-law, as well as many nieces, nephews, other relatives and friends. He was preceded in death by his parents Harvey and Dorothy, a sister Marlys and father-in-law and mother-in-law John and Mary Higbie. Funeral Services will be held at 11:00 a.m. Saturday, May 11, 2019 at St. Paul’s Evangelical Lutheran Church in the Town of Prairie Farm with Rev. Roger Quandt officiating. Burial will take place in the church cemetery. There will be a visitation from 4:00 p.m. to 7:00 p.m. Friday and also one hour prior to the service all at the church.

The family of Eugene F. Bilse created this Life Tributes page to make it easy to share your memories.