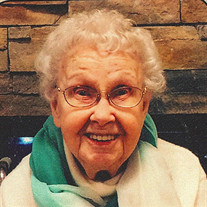 Esther Leona Thibado, age 105, of Menomonie, WI passed away Saturday, November 4, 2017at the Neighbors of Dunn County. She was born February 23, 1912 to John and Augusta (Strehlau) Greene. Esther was born and raised in Menomonie, Wisconsin. She was baptized and confirmed at Peace Lutheran Church. She attended Hilltop country school which was close to the family farm. She met Max Thibado at a barn dance and they were married on August 28, 1930 in Stillwater, Minnesota. To this union four daughters were born: Lois, Rita, Patty and Sally. Esther spent several years with Max farming until the family relocated to Kirkland, Washington during WWII. While Max worked at the shipyards Esther raised her girls and kept a meticulous house. During the depression, war, and rationing she always put a good meal on the table. She was a hardworking homemaker back in the days and she didn't have all the modern appliances we have today. She put her girls to work helping with the chores. After the war was over she and Max moved back to the farm in Wisconsin. After the death of her husband she went to work at Reeds Shoe Store in Menomonie for 26 years. She loved her shoes, especially her high heels, so the job was perfect for her. She was known as the "shoe lady" on main street. Her customers relied on her for a proper fit and comfort. She never forgot a birthday and loved shopping for cards. The grandchildren, family and friends always knew a card would be on its way. She loved spending time with her grandchildren and spoiling them a bit with treats and homemade jam. Esther was preceded in death by her parents, husband Max, daughter Patty McKenna, great grandson Josh Olson and nine siblings. She is survived by her daughters, Lois (Robert) Semerad of Fairfax, VA., Rita Kosman and Sally Wolfe of Menomonie; sister Marian Ford, brother John Greene. She is also survived by grandchildren, Colette Semerad, Paula (Steve)Goughnour, Lisa Semerad, Julie(Mike)Marcellus, Mark Semerad, Lara Semerad, Linda Gil, Sherrie(Bob) McRoberts, Cindy Bragg, Terry Gundlach; great-grandchildren Sarah, Martha, Robert, Becca Goughnour, Lisa, Danielle, Jessica Marcellus, Kevin, Roger Semerad, Brandon Gil(Andy), Justin, Benji McRoberts, Michael, James Bragg. Jacque and Chance Gundlach, and great-great-granddaughter McKenna Borth. Funeral services will be held at 11:00 a.m. Wednesday Nov. 8, 2017 at Peace Lutheran Church in Menomonie with Pastor Bob Friese officiating. Visitation will be an hour before services at the church. Burial will take place at Peace Lutheran Cemetery.

Esther Leona Thibado, age 105, of Menomonie, WI passed away Saturday, November 4, 2017at the Neighbors of Dunn County. She was born February 23, 1912 to John and Augusta (Strehlau) Greene. Esther was born and raised in Menomonie, Wisconsin.... View Obituary & Service Information

The family of Esther L. Thibado created this Life Tributes page to make it easy to share your memories.